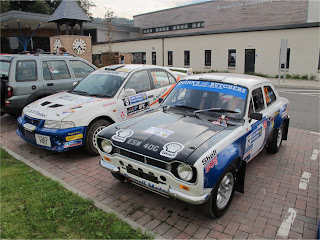 It's hot and sticky in Aberfeldy, with hardly a breath of wind. It's also quite bright and sunny, so goodness knows what we'll get tomorrow! The town is already full of rally cars ahead of tomorrow's Colin McRae Stages Rally, and if anything sums up the atmosphere it's this picture of Gordon Main's Ford Escort MkI sitting alongside Mike Faulkner's Mitsubishi Lancer EVO6.

Stig Blomqvist and Anni Goni are here and have signed on already and just raring to go with Phil Mills in tow looking after the MkII that Stig will drive tomorrow. Built and looked after by by Phil's own Viking Motorsport preparation business, Stig is already casting his eye over Drummond Hill which stands just to the east of the town. It's 30 years since he was last here in an Audi Quattro with Bjorn Cederberg. He won the RSAC Scottish that year so he does have a track record in Scotland, and he's already been mobbed by the fans looking for autographs!

Jim McRae and Pauline Gullick have also signed-on with Jim down to drive a Tuthill Porsche 911, but they were just the early birds. There's over 110 crews entered for tomorrow.

By the way, the only reason for this update is I'm just trying out the phone signal in Aberfeldy with all these bluidy mountains around us. And if I get another signal tomorrow I'll bring you updates from the rally.
Posted by John Fife at 00:19