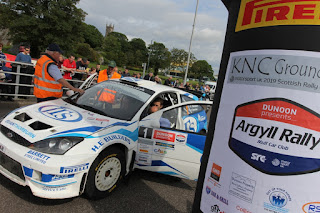 Euan Thorburn and Paul Beaton returned to their winning ways in Argyll when they won the Dunoon presents Argyll Rally in their Ford Focus WRC05, but for 4 of the 8 stages Garry Pearson and Dale Bowen led the way in their Ford Fiesta R5 while Bruce McCombie and Michael Coutts were pleased with 3rd despite their own troubles with their 02 Focus WRC.

Main report is in the on-line mag now and that will be followed by the full Class roundup and all the News & Blethers from Cowal. 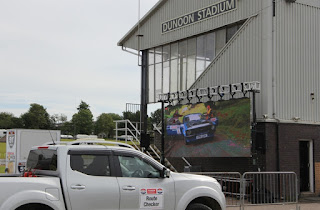 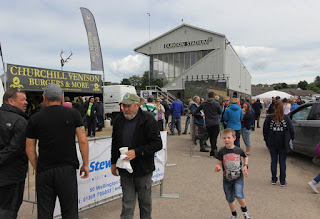 In this week's 'Motorsport News' there was a wee newsy snippet accompanying the main Dunoon presents Argyll Rally report. Contributors are always asked to keep their eyes and ears open when reporting on major events and submit any additional colourful, newsworthy nuggets of information.

Not all of these stories appear in the weekly paper and not always recounted in full as supplied. Contributors, as well as 'staffers' are subject to the scrutiny and the red pen of the Sub-Editor! Over the years there have been a few wee victories such as the acceptance of the word 'stoor' but not grush, glaur or muckle. Similarly, in the early days, the word 'midge' was always replaced with mosquito, that is until some of the staffers ventured north for the Scottish or Burmah rallies and discovered for themselves that the 'midge' is worthy of its own unique identity. Their theory quickly formed that this is a separate species and far worse than any mosquito.

Anyway in the interests of truth and accuracy here is the full un-edited piece as sent to MSN:

" Supported by the Royal Aero Group, the KNC Groundworks Scottish Championship featured a 'Big Screen TV' at the Service Area for the first time. Live images and interviews by Becksport Media were broadcast with Matt Cotton and Luke Barry interviewing crews at stage finishes and on-stage commentary supplied by 'technical pundit' rally driver Andy Kelly and supplemented - and interrupted - by commentary from former co-driver, the inimitable and sometimes politically incorrect, Roy Campbell. Hopefully this popular feature can be implemented in future events. "

Mind you there is a 'third' version of this tale, and ever so slightly longer and perhaps even more embellished than the one above, but that is being saved for the on-line magazine at www.jaggybunnet.co.uk.  That is if we dare to publish it?
Posted by John Fife at 09:56 No comments:

The Americans have a way with words, don't they? Everything is bigger over there not just in physical size but in imagination, description and vocabulary. Last month they claimed Indianapolis is the racing capital of the world, or is it? It doesn't compare to the racing capital of Scotland - Dunfermline. 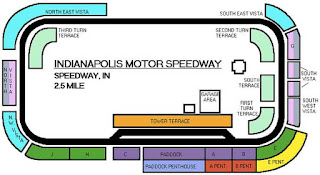 The Indianapolis track is 2.5 miles long and has 4 corners all turning the same way and is pretty much a flat out blast.

Knockhill is 1.3 miles long and has 8 corners, 6 of which are right handers, 2 lefthanders and a long curving left hander 'straight' (not counting reverse direction!). It also has 8 elevation changes depending on whether you are driving or cycling and even more if you are walking the circuit! It therefore requires more steering input and more use of gears, clutches and brakes.

No contest. But I might just be ever so biased.

Find out for yourself this weekend when the Bennett's British Superbike Championship comes to the Kingdom of Fife. If you've never been it offers up intimately close high speed racing and a cacophany of nerve tingling, hackle raising sounds.

The bikes themselves are monsters. Capable of 200mph, they weigh less than a racehorse. The leather clad jockeys are different too, as they manhandle the power of over 200 Red Rums which spend each lap trying to chuck them off their backs.

It's one thing seeing them on the telly, it's quite another experiencing them live. To stand at the exit of the Hairpin and watch these horizontal machines rear up to the vertical and launch themselves at full bellowing blast up the hill is one of life's most memorable, visceral sensations. The BSB weekend gets underway this Friday with two 30 lap Superbike races on Sunday and a full supporting cast of other bikes, riders and races. 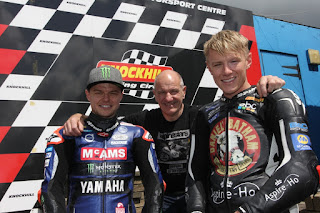 The MacKenzie clan were at Knockhill a couple of weeks back testing with faither Niall chasing after the two boys Tarran and Taylor, but they'll have less time for a chat this weekend. All we can do is just stand back and marvel at the bravery, speed, control and commitment. Mind you the Americans actually do have a word which does this spectacle justice - awesome! 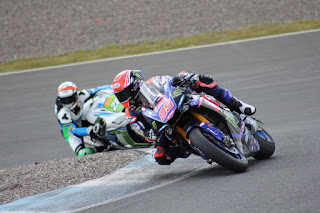 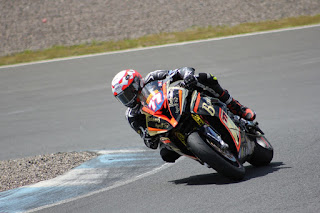 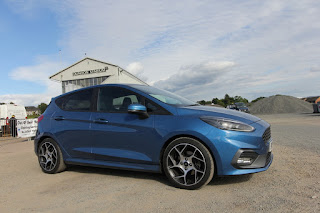 The Dunoon presents Argyll Rally is one of the very few events where travelling by ferry is an option, and perhaps that's why so many folk choose it. For those in the east and the south it offers a genteel and picturesque shortcut with the chance to chill out for half an hour rather than driving through Glasgow and Dumbarton and up Loch Lomondside and through Arrochar, which is usually clogged with tour buses and logging lorries, caravans and motorhomes, furriners and rubberneckers, but for my big pal Jaggy that was indeed the favoured option, as opposed to the more relaxed sea crossing.

The reason was simple, this week's Press Appraisal Vehicle was a Ford Fiesta. So what? It had an ST badge on the grille and on the boot. A 200hp, 1.5 turbocharged little firecracker of a machine.

To make best use of it, the big chap set off at early hours o'clock to beat the traffic and take the long way round the top of Loch Long then down through Strachur past Loch Eck to Dunoon.

Ever mindful of the profusion of speed cameras, which seem to be as plentiful as midges these days, the big chap had a ball. Of course top speed is limited on A and B roads, but if you don't slow down for the corners, you can still have barrowloads of fun.

The ride was pretty firm on its 17 inch Michelins, but it clung to the tarmac more ferociously than a Cowal midge to a peelly waally tourist and it shot out of corners like Edinburgh's 1 o'clock gun.

There was one ever so tiny wee drawback. The Recaro front seats. They were either designed by one of those infuriatingly fit, gym-generation, nuts and grain fed masochists with six packs and buns of steel or a disgruntled teenager denied treats at home and at school who wanted to get his/her own back on normal shaped adults.

That's the reason the big chap was trudging so awkwardly around the Service Area. The side bolsters of the driving seat were never designed for those possessed of a passion for all things Scottish cuisine, especially if served up in batter in newspapers, or inside a hot water pastry crust reeking of minced mutton and gravy.

And yet, ever mindful of his duty as a responsible fair minded motoring journalist the big lad never once complained even as he limped awkwardly up the slope at the back of the Service Area, because he had to drive the delightful wee thing home again afterwards - after having let the traffic die down! In life, it's not just food that needs to be savoured.
Posted by John Fife at 11:12 No comments: 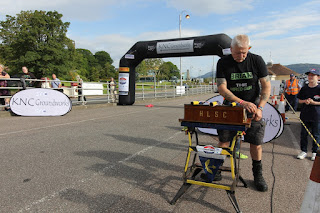 Once again, Dunoon made the Argyll Rally feel welcome and had even asked the Holy Loch Sailing Club's own Brian 'The Hired Gun' to open proceedings with a bang. Using what could be loosely called a starting pistol, but was in fact an accurate and miniature version of a cannon, Brian 'started' the first 3 cars in the 2WD section and the first 3 in the 4WD category.

The array of three cannons were manufactured by the Winchester Repeating Arms Company and presented to the HLSC by the American Navy when they left the Holy Loch in 1992. Naturally Brian used 'blank' 12 bore cartridges but they didn't half make a bang. In fact, the explosions were so loud they might well have caused a few unsuspecting tourists and visitors to have laundry accidents. 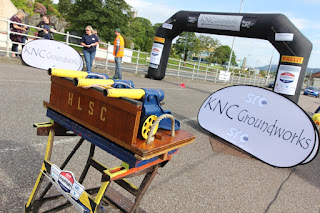 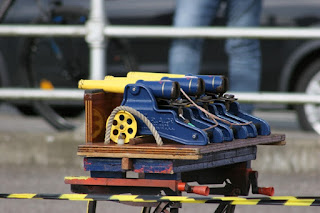 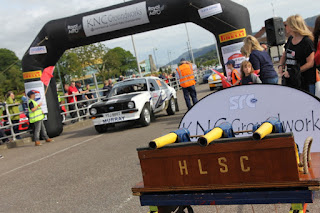