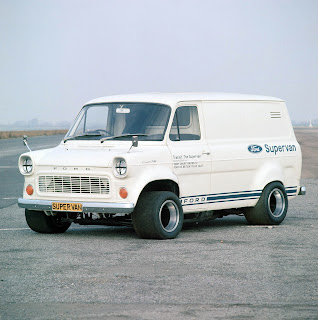 Yesterday’s item about Ford’s latest SuperVan sparked a lot of interest. More than expected, so here’s some more, particularly for those of more tender years who didn’t know that this most sober and reputable of companies used to get up to some promotional high jinks in the past.

The first of Ford’s SuperVans was the outrageous 1971 Ford GT40 mid-engined Transit Mk1 which three-wheeled its way around the nation’s race circuits like a prancing horse in an Olympic dressage competition. The 4.7 litre V8 produced well in excess of 350 bhp and handled like a forest sprung Mk2 Ford Escort, but with oodles more oomph and sounded even more spectacular than it looked.

SuperVan 2 was a much more sophisticated track weapon and had a glassfibre Transit Mk2 shaped body grafted on to a Ford C100 sportscar monocoque with a 582 bhp Cosworth V8.

This vehicle was later re-bodied as the facelifted Transit Mk3 SuperVan 3 powered by a 641 bhp F1 derived Cosworth HB engine. 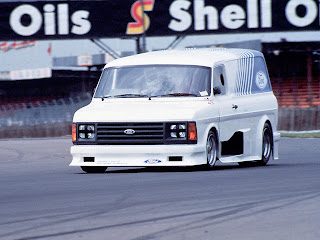 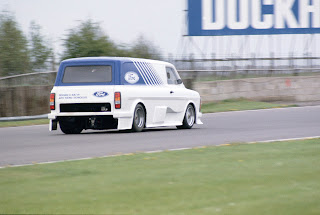 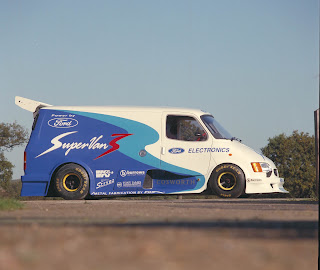 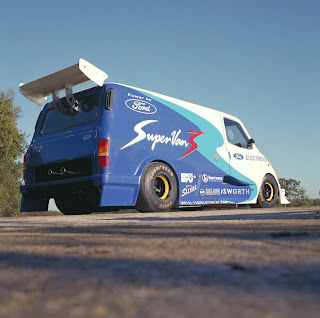 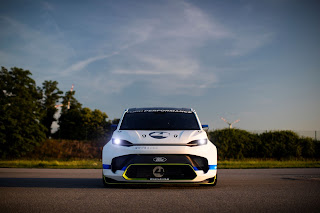 The striking, all-electric demonstrator vehicle was developed in secret by Ford Performance and electrified rally and racing specialists STARD in Austria, with exterior design by the Ford Design team in Cologne, Germany. 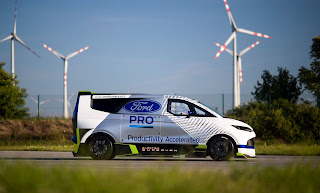 The new van’s motorsport-spec construction marries the E-Transit Custom floorpan with a steel spaceframe and lightweight composite body panels including a sculpted front splitter, side skirts and rear diffuser while the rear design’s cutaways and dorsal fin flow into the rear wing to generate downforce.

The racing influence continues under the skin with unequal-length double wishbone suspension at each corner. Motorsport-grade front and rear subframes, uprights, and brakes deliver the braking and steering capability to match the enormous straight-line go.

· Track – for balancing speed and cornering on track with racing slicks

· Rally – for optimum performance on tarmac and gravel rally stages

Further performance fine-tuning is delivered by an electronics package that includes traction control, launch control, a pit-lane speed limiter and three-stage regenerative braking to return energy to the battery. 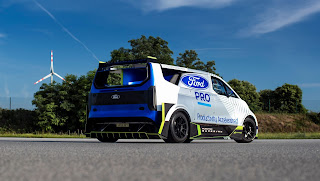 A Tyre Cleaning Mode can deliver exhilarating driving displays; this new feature fully brakes one axle while spinning the other, creating impressive burnouts on the front or rear axles that help clean and warm the tyres before performance runs.

Romain Dumas will drive the van at Goodwood. He has set outright records at the Goodwood and Pikes Peak hillclimbs, and also holds the electric lap record at the Nordschleife, where he won four Nürburgring 24 Hours races. Dumas’ diverse experience also includes the 24 Hours of Le Mans’ outright distance record, an FIA World Endurance Championship title, and a class victory at the Rallye Monte Carlo.

Now please remind me. How do you contact Santa Claus if you don’t have a chimney? 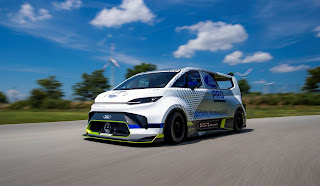 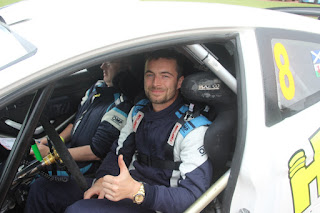 Freddie Milne and Patrick Walsh head a full capacity 140 car entry in this weekend's Dunoon Presents Argyll Rally. And it's not just quantity, there's quality too, as the KNC Groundworks Scottish Championship meets up with the regulars from the Protyre Asphalt Rally Championship.

Add in the points chasers from the SD34 MSG Stage Rally and AS Performance North of England Tarmacadam Rally Championships, plus a flock of Minis from the HRCR Mini Sport Cup and you have all the makings of a huge and colourful rallying jamboree. 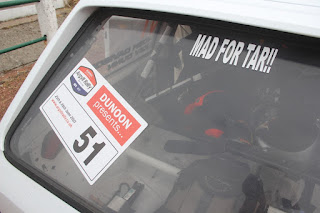 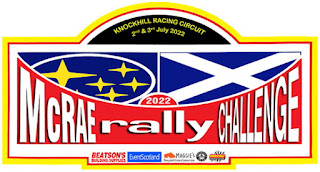 Plans are well under way for the McRae Rally Challenge at Knockhill Circuit on the weekend of 2nd/3rd July and a website shop has been set up to sell memorabilia associated with the event, including replica 'rally plates' as will be worn on the cars taking part in the rally.

There's a whole range of goodies including tee-shirts and hoodies, mugs and water bottles, which can be ordered on-line and the company behind them will have a stand at the Circuit throughout the weekend. They will also have smaller more exclusive stickers for sale on the day which will not be available on the website.

The sale of these stickers and items will be raising money for the event's charity, Maggie’s Cancer Care, and hoping to raise as much money as possible.

The collection can be found here: 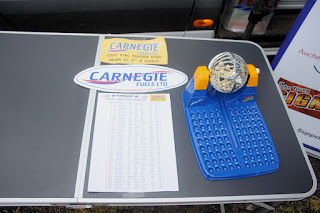 Rare Photos ... Now here's something you don't see every day, it would appear to be an actual photograph of the camera-shy Jaggy Bunnet, former Haggis Herdsman, and something of an ethereal presence in Scottish rallying.

As an unbiased, fair minded, upstanding, un-opinionated fellow, he was 'invited' by Trix and Bruce to pick the winning ticket for the Carnegie's Fuel prize draw at the Summer Stages Rally at Crail. 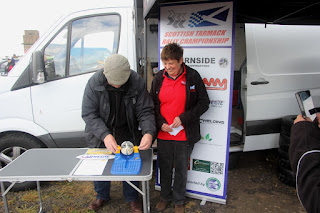 Apparently one James S McRae was unavailable and so was the organisers' second choice (!) so Jaggy was actually their third choice guest - just don't tell him that!

Anyway, it would appear that the big chap mastered the complicated technology remarkably well with Andrew Forbes winning the £250 Carnegie's Fuel Gold Card. 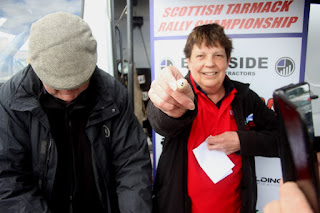 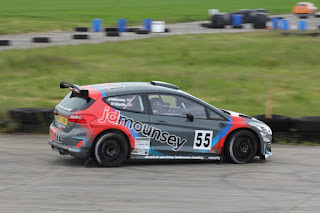 Fancy an early bet for the Beatson's Building Supplies Mull Rally - Mounsey for Mull? Jonathan Mounsey and Richard Wardle won the Summer Stages at a canter in their Ford Fiesta Rally2. John Rintoul and Ross Hynd were 2nd in the MINI while the Lotus Exige of Greg Inglis and Chris Lees was like a gazelle amongst a herd of 4WD heavyweights scoring a scintillating third place overall.

It was grand stuff. Crail was almost in benevolent mood. It was warm at times, and windy and ever so slightly wet, but on the whole quite pleasant, apart from sudden gusts of wind which would blaw yer bunnet across the sea to Holland if ye didnae hing oan. 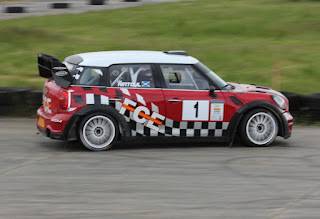 For some, it was a more eventful and less successful day than others, but Jonathan Mounsey has certainly marked his card for Mull in October. Mull is nothing like Crail of course, but Mounsey's mastery of the Fiesta is certainly evident - and remember, his best result so far on the island is 4th!

'Motorsport News' will not be featuring a report from the event this week, so the full story is here, and only here - and includes a full class class roundup ... 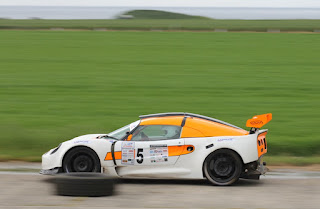