Full Entry List for Sunday's (5th Aug) Glendinnings of Prudhoe Tyneside Stages Rally in the on-line mag. Not a big entry, but the top ten looks pretty good and the next ten look pretty handy too. There doesn't appear to be any official spectating provision as the Otterburn Ranges are considered to be an 'active' military facility. That means that anyone who disregards such advice may find themselves being liberally distributed around the countryside should they encounter anything untoward in the undergrowth or long grass - beware the shiny!
Posted by John Fife at 17:05 No comments:

Sadly they didn't win, but Reay MacKay and Keir Beaton finished 17th o/a in Finland at the weekend in a locally hired BMW 325i. They were contesting the Vetomies Rally, a National event within the main WRC Rally Finland three day format. The nationals contested one stage on the Friday evening and then five on the Saturday running between the double runs of the WRC stages.

The duo took part in the recce last week and compiled their own Pace Notes - a first for Reay! Then they went and watched the Shakedown stage. That proved to be a real eye-opener for the boys. Telling spectators about the speed and seeing it on TV is one thing, actually standing at the side of the road when the WRC monsters hurtle past is quite another. Anyway, suitably inspired off they went. Not only did they survive, but they finished 17th 2WD out of a field of 88 crews. It would appear that Reay behaved himself, for once, resisting the temptation to fling the car into the trees as so many others did!

Anyway, back at the 'other' event in Finland, Ott Tanak scored the fourth WRC victory of his career, fastest over the 320km forest rollercoaster which is Rally Finland. It was a particularly poignant result for Tanak as thousands of Estonian fans had crossed the Baltic Sea to celebrate their country’s first Finnish success since Tänak’s mentor, Markko Märtin, triumphed in 2003.
After coming out on top of a fierce first leg fight with Mads Østberg, Tanak pulled clear on Saturday and eased through the final day. He kept some pace in reserve to win the rally-closing Power Stage and claim maximum bonus points..
Østberg fended off a final day charge from Jari-Matti Latvala to deny Toyota a 1-2 finish. They started the final Ruuhimäki speed test separated by only 2.5sec but the Norwegian held on to secure his best result for more than three years in an upgraded Citroën C3.

Haydon Paddon finished fourth, a minute behind Latvala, while Ogier was fifth after struggling with a new aerodynamic package and shock absorbers on his Ford Fiesta. He headed M-Sport Ford team-mates Teemu Suninen, and Elfyn Evans who finished 7th, commenting: “It’s not been a terrible weekend driving wise and I don’t think anyone can say that they don’t enjoy driving these stages, but for sure seventh place wasn’t the result we wanted.”

Suninen was ordered to check in late at a time control, incurring a 20sec penalty which dropped him behind Ogier and gave the Frenchman an extra two points in his title bid.

Craig Breen finished a very disappointed 8th after a puncture on Friday left him running third car on the road for the rest of the weekend, saying: "It was a difficult weekend for us, with the puncture on Friday that proved very costly, leaving us to clean the road for two days. We nevertheless managed to show our pace whenever the conditions enabled us to do so. It was nice, especially, to finish with a good time on the Power Stage, which means we can now look ahead to Germany with optimism."
Results:
1, O Tänak/M Järveoja (Toyota Yaris) 2hr 35min 18.1sec
2, M Østberg/T Eriksen (Citroën C3) + 32.7sec
3, J-M Latvala/M Anttila (Toyota Yaris) + 35.5sec
4, H Paddon/S Marshall (Hyundai i20) + 1min 35.6sec
5, S Ogier/J Ingrassia (Ford Fiesta) + 2min 15.0sec
6, T Suninen/M Markkula (Ford Fiesta) + 2min 19.2sec
Posted by John Fife at 11:03 No comments:

A number of folk have asked if the post-rally news reports could be published sooner after each event. Yes they could, but they won't. Simple reason, the weekly 'Motorsport News' gets the information first. That's only right and fair as they commission the reports in the first place. Trouble is, I always gather more information than the MN word count will allow, which was the reason why the 'JB' website was started. This provided the platform where more detailed and informative reports could be published, and also the news and blethers that amuse and appeal to us, if not the wider public.

If you want the news first, read it in 'MSN' and then get the bigger story on JB later. On that basis I have published the Column which MSN printed the other week for those of you cheapskates who won't buy the paper.

And yes I know it's dear, but so is a packet of crisps. At 60p a packet, that's 4 quid for a single potato! Who's getting ripped off now? And don't get me started that it's not the same as it once was. Get real, the world has moved on. Irn Bru is different, pop music is weird, fashion has lost taste, discs have gone digital, and mobile phones are simply a curse on modern life. Rallying too is not what it once was. Apparently, that's called progress.

At some point in the future MSN will probably go on-line too, as that is the way of the publishing world these days - and the traditionalists will be left behind.

As ever, this event showed off Scottish rallying at its finest with a behind-the-scenes look at comfort food, sobriety as the ideal way to succeed, proof that water ski-ing is more dangerous than rallying, and that in the heat of competition, thoughts turn not to winning, but to wedding!

Final roundup of events which may, or may not, have taken place at the Mach1 Stages now in the on-line mag:
http://www.jaggybunnet.co.uk/2018/07/28-jul-mach1-stages-news-blethers/ 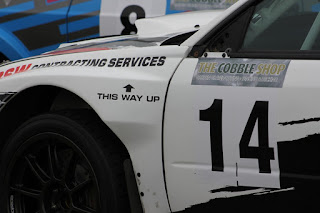 Mach1 Stages - Class Roundup ... That's the round-up from the six classes at the Mach1 Stages now in the on-line mag. It's also worth bearing in mind that the end of season Cobble Shop Scottish Tarmack Champion is decided on the basis of class scores. Unlike most other rally championships, it's not about overall performance, but how competitors fare against their class based rivals.  That's why Ross McCallum (MG Maestro) currently leads the national series overall on 98 points from Michael Harbour (Citroen C2) 87 points and Martyn Douglas (VW Polo) 84 points.