There was another thought provoking column (I might be ever so slightly biased!) in 'Motorsport News' a couple of weeks back, here is the full version. It was titled 'Cost is a Deterrent' but that was only the start ...

The news that 14-17 year olds will be able to contest forest rallies is certainly most welcome. The current scheme based on single venue events and 1 litre cars has proved the viability and attraction of the idea. This latest initiative will open it up further and hopefully attract more participants and generate new interest.

New interest is needed. Even with the 'GoMotorsport' scheme, motor sport is struggling to attract and retain new blood compared to many other popular and more easily accessible sports.

Although the decline in numbers appears to have been halted, the failure to attract significant numbers of youngsters must be a concern to us all. Despite all the effort being expended on attracting newcomers to the sport, there is still one major obstacle. Cost.

That is one reason so many older participants are entering and re-entering the sport in their historic, classic or period machinery. They have made their money and can afford it. Take those numbers into account compared to newcomers taking up the sport, the failure to attract the X-Box generation becomes even more worrying.

The stagnant number of Competition licence holders reflects the fact that the sport is difficult to enter and expensive once you get there. It could also be argued that motor sport is inherently unfair. Those with a bigger budget always have an advantage.

That's why the cost of participation in this sport must always be constantly re-appraised. The news that the MSA is considering a review of the competition seat and seat belt 'lifing' rule is to be welcomed. Instead of blithely adopting FIA rules and recommendations, surely it is up to each individual country's own National Sporting Authority to question whether these are right for the amateur level sport in their own country. Maybe Brexit could have a silver lining for British motor sport?

On that basis, motor sporting rules require a regular clear-out. Instead of constantly adding to the burden we should be seeking ways to change it and make it more affordable. Road car autotests and autosolos are  a great idea, but the minute you move away from standard road cars and add 'timing and speed'  to any type of event requires more money to be spent on personal safety equipment and more car modifications to be implemented.

Safety is cited as the reason for much of this, but we all know that motor sport carries an element of danger which can never be eliminated, no matter how many precautions are introduced. It should be recognised and understood that this is also part of the appeal, and despite the risk element, motor sport has a better safety record than some other sporting pursuits.

Life without risk is like an engine without a spark, you need fire and a bang to make it go.
Posted by John Fife at 10:12 No comments: 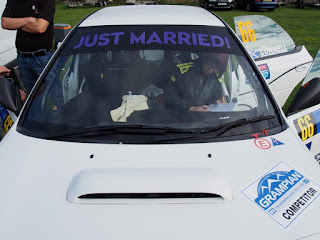 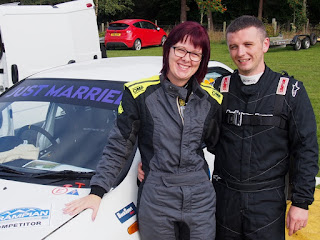 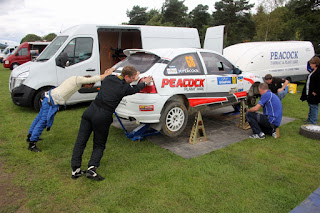 All the Class winners, would-be winners, unlucky non-winners, and those with no excuse at all, from the Grampian Forest Rally now in the on-line mag - just the News & Blethers to come.


That's the most comprehensive report you'll find anywhere in print or on t'internet on who won and who didn't at the Grampian Forest rally now in the on-line mag.

Barry McKenna won in convincing fashion, Jock took top Scottish points, Garry is back and on form, while Andrew Gallacher and Donnie MacDonald are the most likely lads to take the 2018 ARR Craib Scottish title with one round to go, but who will do the business? Class Roundup to follow and then the News & Blethers.

The Scots did well at the latest round of the Cobble Shop Scottish Tarmack Championship staged just over the Border at Otterburn. Michael Harbour now leads the series after Solway and Tyneside from Ross McCallum and Cameron Craig, but dropped scores will start to play a more influential role as the Championship heads towards Pendragon and Crail.