That’s everything in the on-line magazine now from the ‘usedcarparts.co.uk Solway Coast Rally’, and I ken fine it’s late - perhaps that’s why the very rev Mr McCulloch is giving the benediction (photo) for what you are about to receive!

There was quite a bit of British, and Irish, interest in Rally Germany at the weekend with our very own John  MacCrone and Dai Roberts finishing 38th overall in the Watermans Accident Claims and Care Ford Fiesta R2. They also finished sixth in the RC2 class behind a certain Max Vatanen!

At the finish John said: “It was a great feeling being back in the World Rally Championship, and we’re delighted to come away with such a good result. The old-style normally-aspirated Fiesta wasn’t as powerful as the newer R2 cars, and it didn’t have the new brakes and suspension either, so we concentrated on trying to bring the car home in the best possible position we possibly could. And thanks to the performance of the DMACK tyres, we were able to achieve exactly what we set out to do. The icing on the cake was winning the ‘Vatanen Touch’ nomination, and I really must thank DMACK for giving me this incredible opportunity at the end of the year.”

As a winner of the Vatanen Touch nomination, John’s prize will be an invitation to an end of season DMACK shootout, where the prize is a drive in an M-Sport Fiesta R5 car on a round of the 2016 FIA World Rally Championship!

Wonder if Mull could be included in next year’s WRC, eh?

Peugeot Rally Academy driver Craig Breen and Scott ‘Scoot’ Martin survived a huge high speed spin on SS5 to finish 18th overall in the SAINTéLOC Racing run Peugeot 208T16 while Eamon Boland was 28th in his Subaru Impreza. Manchester’s Graham Coffey was 47th overall in his Fiesta WRC but might have done rather better had it not been for hitting a rock on SS3 and tearing off a wheel!

At least he finished. Marty McCormack retired his Skoda S2000 on SS19, Tom Cave retired his Fiesta R2 on the fifth test after a big impact with some German trees and Gus Greensmith had a terminal problem with his Fiesta R2 on SS20.
Posted by John Fife at 17:21 No comments:

The M-Sport team hoped for more than they achieved at the weekend although both crews were in the top ten at the finish.

Elfyn Evans had the potential to challenge for the top positions but was unable to sustain his impressive pace over the course of the whole rally. In the cooler morning temperatures, he and co-driver Daniel Barritt were the only crew to consistently split the leading Volkswagens. Setting the second fastest time on SS9 and the third fastest time on SS19, they were also the fastest crew through SS18 – making Evans the only man other than Sebastien Ogier and Jari-Matti Latvala to secure a stage win.

Unfortunately, the M-Sport man was unable to maximise the available grip in the unseasonably high temperatures that blighted the afternoon speed tests – an issue which demoted him to sixth place overall.

In the sister Fiesta RS WRC, Tänak was enjoying his first taste of a world rally car on Tarmac since this time three years ago. There was a lot to learn and the Estonian was swiftly reminded of how much respect these challenging stages demand when he was caught-out by an unexpected patch of gravel on the opening test and smacked an Armco barrier. He finally finished 8th.

Elfyn commented: "I can't say I'm satisfied with the rally as a whole, but there were a lot of positives and I was certainly satisfied with our performance on a couple of individual stages. We came very close to winning two stages – and we did win one – but we didn't get everything 100 percent right this weekend. In the mornings the pace and the feeling in the car was good but as the temperatures increased, we just didn't seem able to keep that same speed. It's clearly something we need to work on, but the potential is there and we know we can be challenging for the top positions when everything is right."

Team Principal, Malcolm Wilson, commented: "I think it's fair to say that we expected a little bit more from this weekend, but we didn't get everything 100 percent perfect and that's something we need to work on ahead of Corsica. When Elfyn felt confident in the car, his pace was extremely strong and there's no doubting the huge potential he and the Fiesta have on this surface. This event was completely dominated by Sebastien and Jari-Matti, so for Elfyn to be the only other driver to secure a stage victory just goes to prove how strong that potential is. There will be a lot of hard work behind the scenes as we prepare for the next Tarmac event. We know that we have the speed, we just need to ensure that we have everything in place to sustain it over the course of a full weekend."
Posted by John Fife at 10:24 No comments:

A belated round-up from Rally Germany (summat came up over the weekend) where the Citroen team had another bag of mixed fortune. Mads Østberg could only manage 7th place while new recruit and ‘senior’ debutant, Stéphane Lefebvre, scored a top ten finish and one point.

Much praise was heaped on the youngster by the Citroen team: “Stéphane Lefebvre produced a flawless performance on his debut in the DS 3 WRC. Meticulous and incredibly consistent on his maiden WRC appearance, he concluded the event in tenth place, scoring his first point in the World Rally Championship! “ which bodes well for this future hopes and aspirations, but perhaps not so well for a certain Kris Meeke.

By the end of the fifth stage on Friday Kris was lying fourth, but it all went wrong on SS6. He ran wide and into a field on a slippery corner, damaging part of the front suspension. He managed to keep going, but was forced to drop his pace in the final few stages, losing around ten minutes on the leaders.

He dropped to 25th place and afterwards said: “On the second stage of the afternoon, there was some mud on a second-gear corner. We slid wide in the middle of the bend and ended up in a field. It took me about thirty seconds to be able to get back onto the road. Once we were going again, I got back up to full speed. But four or five kilometres later, part of the front suspension broke under heavy braking. We had to drive slowly to make it back to service. I’m really disappointed because our pace was good from the start.”

Meeke fought back to finish 12th overall and was second quickest over the final day Power Stages scoring a valuable 2 extra WRC points: “As our chances of a good result disappeared after my mistake on Friday, we had to find other sources of motivation. Three kilometres into the Power Stage, I felt confident so I decided to push to try and score a few points. It means that the rally ends on a positive note, but overall it has been a disappointing weekend. I’m going to keep working to eliminate these errors and I hope to do better at the next few rounds on tarmac, especially the Tour de Corse, which will be new for everyone.”

Afterwards, Yves Matton, Citroën Racing Team Principal commented: “Kris Meeke confirmed that he was competitive on tarmac and on gravel. Unfortunately, his mistake was a very costly one in terms of the overall result. After losing time on the first day as he looked for the right rhythm, Mads Østberg showed he was capable of fighting in the midfield on a surface which is difficult to get to grips with. On his first rally in the DS 3 WRC, Stéphane Lefebvre had an impressive race, which will have surprised many onlookers. He applied the instructions given to him by the team to the letter and the end result is beyond our expectations. His stage times and his splits were very interesting. We are keen to keep supporting him as he improves.”

John MacCrone tries out a new steering wheel for size. Or is it? So what is he up to? The clue is in the 'material' it's a pretzel and the Germans eat tonnes of the stuff. 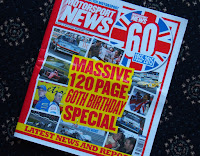 Yesterday’s Motorsport News was well worth it’s cover price of £3.99, I’ve spent more on a pint of beer in the past. The 120 page special issue marked the 60th anniversary of weekly reporting on all things motor sport. In these days of mega pixels and touchscreens, smart phones and tablets, finger swiping and scrolling screens, there is something intrinsically comforting about the tactile feel of a newspaper.

It could be argued that I’m biased, or at least have a vested interest, since I have been contributing to it for over 40 years. Some may think I do it for the money. The truth is, the fees rarely cover the expenses, let alone the time. So why do I do it? I really have no idea. It’s more than just a habit. It’s more of a compulsion.

My big fear is that we might lose it. And if we do lose our last weekly motor sports newspaper, there won’t be another. The days of newsprint are fast coming to an end and that will be our, and the sport’s, loss.

The one comforting factor about newsprint is that the author’s name is inked on the page alongside the copy. The reader therefore has some assurance regarding the accuracy of the information and in the case of ‘opinionated views’ knows where they are coming from. With regard to the internet, many folk are not quite so sure about the source and accuracy of the information, so there are always doubts.

Unfortunately, the Newsprint industry is still facing its impending demise. Sales of all print titles are down as the public turn to electronic devices and ‘rolling news’.

Admittedly, there is a place for it, if you have a suitable device with the right software, or the correct app - and you remember to charge it up before you drop your trousers and sit down on the loo seat for the weekly news catch-up.

The newspaper still has a lot going for it. It is easily folded and transportable, doesn’t require a mains charger to be carried or charged up regularly. It has a full colour interface which is automatically switched on the second you open it. It is menu driven and each page is numbered for easy navigation, and it is also much easier to scroll down and across pages. And if you drop it, it won’t break.

We can all argue about content and complain that articles are shorter than they once were, but that’s because there are fewer adverts – the internet has gobbled up most of that business now. In the past, advertising revenue covered all the basic production costs while the cover price paid for the distribution costs.

Look at it from another point of view. Where else can you get a weekly update of all that is happening in motor sport, from Rallying to Formula 1, from personality interviews to the occasional argumentative columnist? There is also a certain degree of comfort to be had from the knowledge that there will be another update next week produced by familiar names in a recognisable format.

Because for sure, one day it won’t happen. When, is entirely up to you.

As I said, I’m biased, but one thing’s certain, I’ll be distraught if it happens.
Posted by John Fife at 10:21 No comments: