David Bogie and Kevin Rae carved another notch on their gearstick with another rally win and a maximum score in the Scottish Championship when they won today’s Scottish Rally in Dumfries.

But perhaps the drive of the day came from second placed Euan Thorburn and Paul Beaton who fought back from 9th place to grab the runner up position by 7 seconds from last year’s Scottish Rally winners Jock Armstrong and Kirsty Riddick.

Mike Faulkner managed to overtake Barry Groundwater for fourth place over the final 14 mile blast through Ae, but there was a sting in the tail.

Three crew members are in hospital tonight after accidents befell two cars. Rallying does take its safety seriously, but accidents will happen and it is hoped that all three crew members have been taken in for purely precautionary measures.

He might be leading but he’s still trying. David Bogie continues to lead the Scottish Rally after four of the day’s six stages. “I had three half spins in Castle O’er,” said David, “that’s not like me. I’m trying to keep it fast but safe. It’s really quite slippy in places.”

Jock Armstrong is holding second place but coming under threat from the fast closing Euan Thorburn. “I’m trying too hard, and making mistakes” said Jock, “I came in too hot to the final hairpin in Castle O’er and slid wide.”

Euan Thorburn is another who reckons he’s trying too hard and making mistakes because of it, but at least the car is going better. The electrics behaved themselves in Twiglees and Castle O’er and he got a good run through both: “It wasn’t actually raining that time,” said Euan, “so whether that has something to do with it I don’t know. That’s the trouble with electrics, you don’t where to start fault finding.”

Bruce McCombie had a slow puncture in SS, “but it didnae slow me down much” and Steven Lockhart dropped out of the top ten when he spun in Twiglees and dropped off the road. Chris Collie is a bit subdued today: “There’s something wrong with second gear, it’s very difficult to go in,” said Chris, “so I’m trying not to use it.”

Rally - Bogie in the Lead

With two stages gone in today’s Scottish Rally, David Bogie has already pulled out a convincing lead over Jock Armstrong, but Armstrong’s pace is still surprising, first time out since he cowped it on the Speyside last year. Mike Faulkner is third and pedalling the old Lancer as hard as he can: “There’s nothing left, that’s as fast as she’ll go,” said Mike.

Barry Groundwater is fourth, but has a bit of fuel surge at the top end of the revs: “She’s having to sook hard when the level drops below 25 litres,” said Barry, “we’ll need to run a full tank this afternoon just to make sure it’s OK.”

Already Euan Thorburn is having a bad day in the Focus: “It cut out and stalled in the first stage,” said Euan, “then the Launch Control failed at the start of the second stage and it cut out mid-stage again and stalled.” The boys thought they had fixed the problem yesterday at the shakedown but it seems something else has gone wrong with the electrics.

As for Bogie: “I was surprised at my first stage time (20 secs quicker than anyone else), I didn’t think it was that good. I like the stage but I wasn’t expecting to be that quick.”

Jock Armstrong is please with second place overall at this stage, driving the rebuilt car that he crashed on the Speyside last year: “I was down at Phil Price’s place in Wales during the week, just having a wee try,” he said, as he stood in front of the scuff marks ahead of the rear wheel arch on the driver’s side! “Those stages were slippery this morning, but there was grip to be had in places.” he added.

And despite what the weather forecasts predicted there were showers in the south west this morning, some really heavy ones and crews were struggling with cars that were steaming up and wipers which couldn’t cope with the volume of water falling from the sky – flaming June indeed!

There was a good turn-out at the rally shakedown in Ae today ahead of tomorrow’s Scottish Rally at Dumfries, and despite all the best laid plans and preparations there were some last minute dramas.

Euan Thorburn only got his Focus back from Buckley’s last night: “After every rally we drain all the oil and change it,” explained his Dad, Alistair, “and after the Reivers we found some iron filings in the stuff we drained out of the gearbox. There was damage to 6th and 2nd gears so they had to be changed otherwise the ‘box was fine.”

Then after a couple of runs this morning, Euan came into the service area with a frown: “The accelerator jammed open in there, not all the time, but intermittently.” Still, it’s better to find out these niggles today rather than tomorrow.

Another in trouble was Alick Kerr looking forward to his first run out since the 2010 McRae Stages: “I’d like to do a couple of events this year,” said Alick, “and maybe look at a full championship season next year.”

Using the same Group N Subaru, but with a 34 mm restrictor fitted now, he was soon back in the groove, but all too soon back up on the jacks: “We’ve found a crack in the gearbox casing and oil is seeping out.”

So that’ll be another over-nighter then.

And despite the weather predictions of rain clearing northwards, nobody told the rain Gods. Ae is a pretty dreich place when it’s wet, so it was really quite dismal this morning with one or two really heavy plumps of rain interspersing the drizzle.

David Bogie had some guests to take around during the shakedown, one of whom had paid a lot of money at a charity night to sit beside the three times Scottish Champion, and was looking ahead to tomorrow. He was surprised at being given the Number 1 seed ahead of last year’s winner Jock Armstrong, but then reckoned: “Jock should have the number 1 place but I’m not going to complain, “ the Scottish is renowned for dusty stages and I don’t want to get caught in Jock’s dust!”

I think he was joking.

Quintin Milne was there too and had a three runs with Barry Clark riding shotgun: "I'm still driving the Lancer like a MkII," said Quintin, "so Barry is trying to tidy me up and take neater lines." That'll be a difficult task for Barry, he's a helluve adriver, but he's no magician! 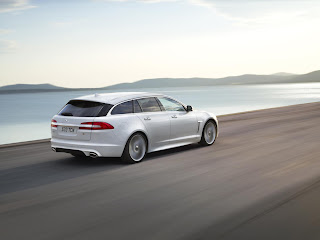 Jaguar has revealed the price list for its gorgeous looking new XF Sportbrake which goes on sale now ahead of deliveries later in the year.

The new car will have a choice of 2.2 and 3.0 litre diesel engines. The 2.2 diesels will be available in 161 and 197 bhp output capacities, while the 3.0 litre turbocharged V6 engine will come in either 237 or 271 bhp form. All come as standard with the 8 speed auto box  and will have Stop/Start systems as is the way of progress these days.

Prices start from just under 32 grand for the entry level 2.2 litre job, just over 36 grand will put you inside a V6, while the V6 Diesel S Premium Luxury won’t leave you with much change out of 49 thousand.

But just in case you’re still not sold on diesel engines in luxury cars, the Diesel S XF Sportbrake can accelerate to 60 mph from rest in just 6.1 seconds. The ‘smaller’ 237 can do the same job in 6.7 seconds.
Posted by John Fife at 09:29 No comments:

Now I know it’s not rallying, and it’s not strictly motor sport (Formula 1 has long since ceased to be motor sport, it’s just pure show business now) and it’s not even a general motoring bit of news – but this item is interesting in its own right.

There has been a lot of talk about an F1 street circuit in London over recent years, even before the Birmingham F1 idea was mooted, but with all the hype surrounding the forthcoming athletic event and the ongoing Jubilee celebrations, maybe this isn’t such a fanciful idea.

Anyway, we’re all petrolheads at heart, so if you’ve got a few minutes to twiddle your thumbs, try this and see what you think:

Rally - Beattie and the Bogie

Got an email from top co-driver Dave Robson the other day, which is very topical considering this weekend’s Scottish Rally, although it’s not very flattering to some. Well, it made me smile.