Sad to report that Frazer Madder passed away in hospital on the 16th of November. A name which will be familiar to many of you, but few of you will know the man.

He was one of the founders of the Scottish Motorsport Marshals Club and was one of the men who crewed the Motorsport Rescue units in the early days of the organisation. On that basis you didn't really want to meet Frazer because if you met him on duty during an event that meant you were in trouble!

Frazer was one of a number of regular motor sports Marshals in the early 1970s that realised that motor sport was dangerous, more so for amateur and club racers and rallyists than the professionals at the sport's top level.

At that time the British Racing & Sports Car Club had a Scottish 'division' and some of the northern stalwarts attended a training day at Silverstone in 1970 and there they saw their first ever dedicated Motorsports Rescue unit.  That sparked a desire to create a more 'professional' approach to the volunteer support back home in Scotland.

Along with David Swinton, Mike Gascoigne, Iain Ralston and others, Frazer helped to found the Scottish Motorsports Marshals Club in 1976 and a previously unheard of activity was introduced to the volunteers - 'training'.

Their first rescue unit was a Ford Transit, donated by Mike Fenwick of Auchentoshan Distillery and it was Frazer who kitted it out - after taking off the Auchentoshan signwriting! In fact he actually kitted out most of the early rescue units himself. He was very much hands-on, designing the interiors, constructing the racking and overseeing the on-board equipment.

He was also part of the team which organised the first ever SMMC motorsports marshals training day at Croft Circuit in 1979. The day's activities have entered into the club's folklore where certain individuals still believe that they hold the lap record at Croft - with a 42 seater coach.  The MSA would have a fit at what went on that day, but everyone left Croft having learned a hell of a lot even with their singed eyebrows from the fire rescue demonstration. Yes, it was fun, but there was a serious purpose to the day, and that continues.

On their return, training became a staple part of the club's activities between events, and a surgeon was initially cajoled into attending events to help train the volunteers.

It has been said that he could be a pain in the *rs* at times, but if you want things done, then someone has to take charge and see it through. Otherwise he was relatively quiet. A financial consultant, auditor and  accountant by trade, he had more of the 'pencil and calculator' approach to figures - computers were an abomination!

He stood down from active duty around 2009 but his contribution to the sport and improvements in safety are incalculable. Motor sport owes him a huge debt, especially those competitors who required their medical assistance in times of extreme need .

Those early pioneers of the SMMC had a vision. More than that, they actually turned their vision into reality at a time when 'safety' was a bad word in the sport.

He'll be sorely missed by friends and colleagues, but his place and achievements amongst those early visioneers is assured.

Note: His funeral will take place on Thursday 1st December at 2pm at West Lothian Crematorium, Cousland Wood, Starlaw Place, Off Starlaw Road, Livingston EH54 7FD. All are welcome to attend.
Posted by John Fife at 21:00 No comments:


Bob Morland's funeral will be held on Wednesday 7th December at 11:30 am, at Jardine's Chapel of Rest, 23 Terregles Street, Dumfries, DG2 9AA. 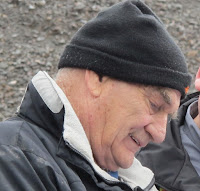 More sadness for Scottish rallying. Bob Morland passed away on the night of 23rd November, peacefully and with his family around him. He had been fighting cancer since June 2015.

For the past 12 years he was Team Faulkner and Foy's mascot, but more than that. He prepared meticulously detailed Service Plans for Mike and Peter and ran Chase or Management Car as often as he could manage.

He was full of stories and some of them were quite long. If he managed to catch you, even when you were in a hurry, you knew you were going to be late, no matter what. You were stuck till the end of the tale or the punch line. He had a terrific memory but that was what made his stories, even the long winded ones, so interesting.

He also had an embarrassingly good memory. Things which I had thought long forgotten (and should remain forgotten) he would recall with mischievous relish.

After school at Dumfries Academy, he completed an Engineering course at Dumfries Technical College in 1952 following which he started work with the Carnation evaporated milk factory in Dumfries although his active rally involvement didn't start until he met Derek Attwood in 1964.

Derek was one of the top rally navigators at the time and was running classes to teach newcomers. Bob teamed up with Walter MacDonald and a lifelong passion commenced. Not only was he a quick learner, he was quick to master the 'tricks of the trade'. For instance, he was known to wear three wristwatches on occasion – one with the correct time, one running a minute slow, and one a minute fast.  If trying to cajole a Marshal into giving him a different time or confusing him with 'science' failed to work then he could produce a watch to match his claim!

He did try his hand at rally driving once, but that ended with the car on its ear near Lochmaben cemetery. After that he stuck to navigating and expanded his interests when Walter took to the forests for stage rallying.

Over the years he navigated for innumerable drivers young and old and always keen to help the youngsters. In addition to Walter other drivers for whom he 'assisted' included Ivor Clark, Ian Paterson, Ricky Wheeler, Jim Doig, Richard Stewart and Harold Tweedie, in 'Daisy' the Daihatsu Fourtrak, to name but a few.

The nearest he ever came to 'superstardom' was on his own club's stage rally, the 1988 Tweedies Daihatsu Forest Stages Rally when he and Ricky Wheeler finished second overall behind a certain Colin McRae and Alison Hamilton. This was Colin's first ever outright victory while Murray and Mark Grierson were third. Given such exalted company, you'd have thought Bob  had won the World Championship.

Aside from competition he did his bit for the club, serving on the Committee of South of Scotland Car Club and undertaking Timekeeping duties on many events.

Of course it's not just us who will miss him, his sons, Kenneth and Graeme and daughter Joyce and 9 grandchildren will be bereft. As will his partner, Chris and her two grandchildren. Bob doted on the youngsters using his engineering expertise in the building of complicated Lego structures and also devised a novel way of teaching them maths - using peas, sweetcorn and chocolate buttons!

Rally service areas will be much quieter now after Bob's passing and we'll all miss the hand on the arm and the "Wait till I till ye this" which then led on to some sporting or political point he wanted to raise or pass on. And also the permanent sense of mischief. There were occasions when he pulled an MSA Blue Book out of his pocket to reinforce a point of view, pointing out the appropriate regulation to the objector. It often took quite a long while for the objector to notice that the Blue Book in question was 10 years out of date!

Nope that wasn't a merry twinkle in his eye. That was a permanent sparkle of mischief. They don't make them like that any more, and the sport is all the poorer for it.

Note:
There is a longer version of this tribute in the on-line mag. there is also something else. Three weeks ago, Bob sent me a letter. It's also too long to print here but I have permission to print it in the on-line mag. I also had permission to 'trim' it, but nope. He wrote it as it was, so I left it as it was. And just so you know, he called me 'Faither' (hence the letter's intro) and I called him 'Gramps'. If you get a moment, have a read:
http://www.jaggybunnet.co.uk/2016/11/25-nov-obituary-bob-morland/

The story of Volkswagen in the WRC ended with victory for Andreas Mikkelsen by 15 seconds over World Champ team mate Sebastien Ogier in Australia at the weekend. This was the Polo R WRC’s 52nd rally and gave the most successful car in the history of the FIA World Rally Championship a worthy send-off having claimed 4 world titles in the past 4 years.

Victory in the final rally of the year saw Mikkelsen and Anders Jæger do all they could to finish second in the World Rally Championship. However, their rivals for the runner-up spot, Thierry Neuville and Nicolas Gilsoul in the Hyundai were in no mood to give up second place. The Belgians claimed the third spot on the podium behind Mikkelsen/Jæger and Ogier/Ingrassia.

Jari-Matti Latvala was denied a happy ending at the final rally of the year having damaged his car's suspension when it brushed a barrier on a bridge at the very start of the rally.
At the rally finish Andreas Mikkelsen said: “What a fantastic weekend, and what a wonderful result at the end of our season. Today has been a very special day, as it was our last appearance as a team. I was so desperate to win this rally for Volkswagen. It is fantastic to have achieved that. Volkswagen is the team that gave me the opportunity to step up into the top class of the WRC. They put a lot of faith in me and made so much possible for me. They will always have a special place in my heart. Everything came together at the final rally. Everything, absolutely everything, worked perfectly – it was simply the optimum of what we have achieved together in four years in the World Rally Championship. On the one hand, it is a bit of a shame that we just missed out on second place in the championship. On the other hand, that is not so important. If I had been given the choice of winning our final rally together or finishing runner-up in the world championship, I would always have chosen the win.”

Sébastien Ogier added: “I was a bit wide exiting a left-hander at the end of the ‘Wedding Bells’ stage, and spun. In the huge dust cloud, it took me a few moments to work out where the road was. We lost almost 20 seconds as a result. However, I have no regrets. Julien and I were really going for it all weekend, and had had a great battle with Andreas up to that point. He deserved the win. The most important thing is that our fantastic team bids farewell to the World Rally Championship with a victory. This is a very emotional moment for me. I have so much to thank the team for. Volkswagen Motorsport has been like a family to Julien and me.”