Toyota Motorsport has confirmed its intention to enter the World Rally Championship - but not until 2017. That's a pity, the new car looks good.

I know it’s not rallying, but we all love the Stig as much as we love Guy Martin, so I thought this might be of interest. Causing quite a stir on its 3 day trip from the home of ‘Top Gear’ at Dunsfold to Warsaw in Poland is this 30 foot high statue of ‘The Stig’ having a bit of a lie-down on the back of an artic.

The statue was commissioned by the BBC to launch its new global TV Channel ‘BBC Brit’. It has been erected in Warsaw adjacent to the city’s most famous landmark, The Palace of Science and Culture to celebrate the international channel making its debut on 1 February 2015.

The organisers of the Scottish start for this weekend’s Monte Carlo Classic Rally are expecting over 10,000 spectators in Paisley tonight. In addition to the actual event start, there will be a parade of classic cars to enhance the atmosphere with around 70 period cars congregating in Abbey Close and Bridge Street near Paisley Abbey.

The first of the competition cars is expected to set off at around 19.00 Hrs for the 1042 km Glasgow to Reims first ‘Concentration’ leg of the rally. There are 310 entries in total with a choice of 5 cities from which to start including Barcelona, Copenhagen, Turin and Reims with Paisley being the fifth venue.

Entertainment will be provided from 4pm courtesy of Des Clarke and Jennie Cook of Capital FM.

So if you’re doing nothing tonight or heading west after work, why not drop in for a nosey.
Posted by John Fife at 10:52 No comments: 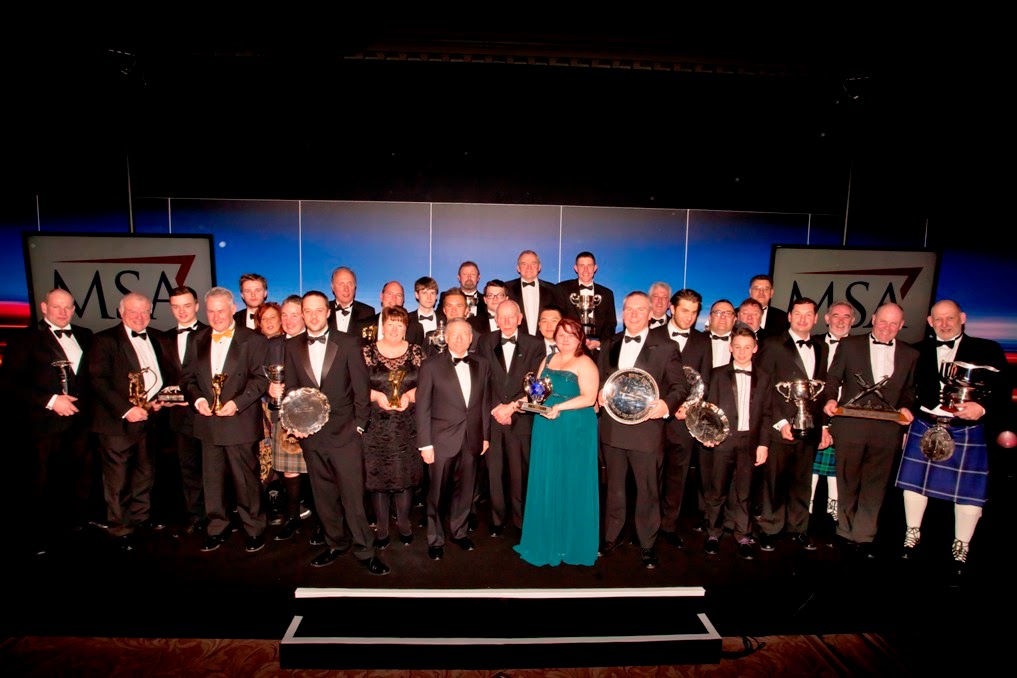 The Motor Sports Association (MSA) hosted a rather special event in the Royal Automobile Club on Pall Mall (that's in London, England, by the way)  on Saturday night, for the annual MSA 'Night of Champions' awards evening.

Amongst those in attendance were some Burns Night refugees including Donald Peacock (doesn't he polish up well?) and Norman Gowans from Solway Car Club. As has previously been reported, Solway CC won the Car Club of the Year award and looking at the size of the cup, I wonder who will fill it when they get home. The other chap in the kilt is Colin Calder who won the MSA British Sprint Championship.

What's the betting Jean Todt is away home to look up Dundrennan on a map.
Posted by John Fife at 14:36 No comments:

Toyota Motorsport has released more details and kit costs for its new rear wheel drive FIA R3 rally car. Available from mid season but only in Germany initially. Anyone going to Europe on their hols and fancy a modern Escort Mk2?

The one-two-three finish at the 2015 Rally Monte Carlo was Volkswagen’s 23rd victory with the Polo R WRC and the eleventh time the manufacturer has had more than one car on the podium since it joined the series in 2013.

Sébastien Ogier and Julien Ingrassia finished on the top step for the 25th time at the Rally Monte Carlo, and for the second year in a row. This sees Ogier pull level with rally legend Colin McRae in the all-time list of WRC wins. Volkswagen became only the fifth manufacturer since 1973 to record a ‘triple’ in the ‘Monte’ history books, and thus joins the ranks of such legendary rally manufacturers as Renault-Alpine, Lancia, Audi and Citroën.

At the finish Sébastien Ogier said: “Getting a win at the Rally Monte Carlo is special for any driver, but words can't describe what a win here means to me – this is my home. The atmosphere was magical. This 83rd staging of the 'Monte' is one of the most difficult rallies I can remember, as far as the conditions are concerned. Selecting the tyres was particularly difficult at the start. Then there was the exciting battle with Sébastien Loeb. Big thanks go to our team and my ice spies. It goes without saying that I am also delighted with the great overall result for Volkswagen; as long as I'm at the top, Jari-Matti and Andreas are my favourite people to share the podium with.”

Jari-Matti Latvala added: “We couldn't have wished for a better start. Our aim right from the word go was to finish in the top four, and we did better than that. I'm delighted. It's a weight off my mind since my previous starts at the Rally Monte Carlo hadn't exactly been successful. The conditions weren't easy and you had to compromise on speed to avoid making mistakes. After we had built up a good lead early on, it was all about getting the overall result, and no longer about setting the fastest times.”

Andreas Mikkelsen finished third: “Before we set off I would have taken any spot in the top five. Third place exceeds all my expectations. The conditions at this 'Monte' were extremely difficult and it was the first time that I have started here when there has been snow, ice and slippery asphalt. Right from the start my focus was on finishing safely – and it paid off. I learned so much and ended up with a lot. Quite simply, it was a dream start.”

And the pedal cars? Apparently Prince Albert of Monaco became a Daddy to twins a few weeks back. These marketing men don’t miss a trick, eh?
Posted by John Fife at 20:42 No comments:

M-Sport World Rally Team's Elfyn Evans and Ott Tänak made a promising start to the 2015 FIA World Rally Championship at Rallye Monte-Carlo. Evans and co-driver Daniel Barritt finished the event in a solid seventh place but it could have been so much more. The Welshman was in a strong fifth place – chasing fourth – when he clipped a wall in SS11 and damaged the rear suspension of his Ford Fiesta RS WRC. Never willing to give up the fight, he and Barritt resourcefully fashioned a temporary repair which avoided retirement and kept them in the fight.

Tänak and his co-driver Raigo Mõlder were running as high as second overall before being caught out by an unsighted patch of gravel after a crest in SS10. His Fiesta RS WRC slid off the road down the side of a steep embankment. Rallying the enthusiastic spectators around him, the Estonian achieved the seemingly impossible, re-joining the stage. He finished 18th, and collected two manufacturer points.

At the finish Elfyn Evans said: "There's a feeling of what could have been at the end of this event. The potential was definitely there to do more, but there were a couple of silly mistakes on my part – one of which was extremely costly. We had some very good tyre choices throughout the weekend, but then again some weren't quite so good so there are some things to learn. Overall the speed has been good and that is definitely a big positive that we can take from this weekend. We can also see where we went wrong which is important for the future and I'm looking forward to coming back and having another go at the event next year."

Ott Tänak said: "It's not been such a bad weekend for us. We were not pushing – just trying to drive with a reasonably good rhythm. The conditions were very tricky and the grip level changed on almost every corner so it was a proper Rallye Monte-Carlo! That is what makes this rally so difficult and that's why you need to have really good pacenotes and have the experience to know how the conditions are changing from one section to the next. Unfortunately we just had one moment yesterday which lost us a lot of time. But we have certainly learnt a lot."

Team Principal, Malcolm Wilson added: "The result is not what it could have been, but I have been extremely impressed by both Elfyn and Ott this weekend. We were running as high as third and fourth overall [Tänak as high as second after SS1] and it is fair to say that we never expected to be in that position. Finally, I want to commend two unsung heroes of the WRC: the spectators who helped Ott and Raigo re-join the event yesterday afternoon; and our mechanics who had to make some significant repairs in limited time over the past two days. I fully believe that we have the best technicians in the sport. They've proven their skill time and time again and it is a pleasure to have each and every one of them under the M-Sport banner."
Posted by John Fife at 17:13 No comments: