A force of nature that blossomed briefly in Scottish rallying in the early 1980s  is sadly now gone. Jim Fleming from Melrose lost his long and painful battle with Lyme disease last Friday. A farmer and agricultural contractor, he was a hard worker and hard player as well as a pretty successful rally driver.

He made an impact on the sport that was far bigger than any results listings could show. Anyone caught up in his wake as he scorched through life only have themselves to blame.

Always interested in rallying, he actually part sponsored Alistair Brearley for the 1978 Jim Clark Rally which of course led to him mixing with the 'wrong crowd' with the result that a passing interest turned into something more serious. That led to him buying an Opel Ascona from Cleland's of Peebles which was then turbocharged producing a four wheeled animal that had more power than grip.

The debut of the Fleming Automobile Rally Team (or F.A.R.T. for short) was a rally sprint at Stobs Camp and he turned up with a single decker coach which had been converted into a race car transporter. It was also primarily used for hospitality at the trade and agricultural shows at which the family business attended. However for those of a more sober and sensible lifestyle this was to be avoided at all costs. The interior was furnished with an array of optics and a variety of spirits which would have shamed many a pub. I still don't know how or when I got home from that event! 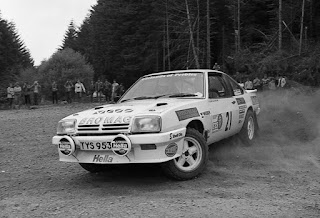 With Alistair Brearley in the left hand seat, Jim enjoyed moderate success which led to another successful outing at Kirknewton airfield. So encouraged was he that he invested in an Opel Manta GT/E and registered for the Esso Scottish Rally Championship in 1981 tackling a few events before having a crack at the Challengers Championship the following year.

Rodger MacFarlane signed up for the Snowman and John Wilson Bedroom Stages and they finished 24th and 23rd o/a first time out. With Rodger on CofC duty for the Border Counties, Jim roped in a farming friend for co-driving duty, one Louise Aitken no less. They finished 45th! Re-united with Rodger he finished the season in 9th place in the Esso Challengers (newcomers) section.

The 1983 season started with a 10th o/a on the Snowman but following an engine blow-up on the Wednesday night before the Hackle Rally, a standard engine was installed for the Saturday event. They finished 15th. A string of top 20 finishes thereafter ensured he won the Esso Challengers title and finished 9th o/a in the main championship. He rounded off the season by lending Bruce Lyle his Manta for the Galloway Hills which allowed Bruce to win the West of Scotland Championship title - despite Jim navigating for him.

1984 brought more success and he finished 13th o/a in the Scottish Championship although he missed out on four rounds. Oddly enough his worst result was on the Andrews Air Conditioning Rally when Rodger was on CofC duty again and Bruce Lyle was pressed into service. They finished 61st! 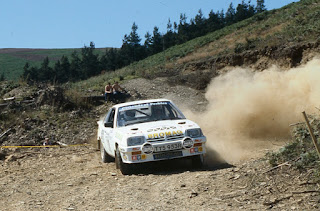 Late in the 1985 season, Jim teamed up with Alan Patterson and they went on to contest the 1986 British Open Championship. They finished 31st on the National Breakdown, 25th on the Welsh and 48th on the RSAC Scottish, but more importantly, they won their class each time which clinched a British Championship Class title for the duo.

His sporting endeavour came to an end after that season as the family business got busier allowing an element of peace to descend on Scottish rallying, especially in the Borders.

I last saw him three years ago and he was putting a brave face on what is a terrible disease. And you know what, there was still the glint of that notorious twinkle in his eyes which intimated that impending mischief was never far away.

Our condolences to Ann, Michelle and Ross. 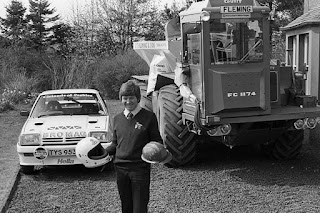 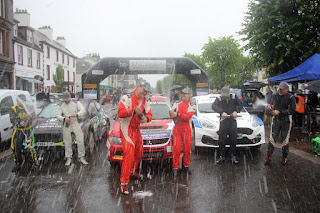 That's the main report from the Dumfries & Galloway RSAC Scottish Rally now published in the on-line magazine. Victory for Michael Binnie and Claire Mole has pitched them back into contention for the 2022 KNC Groundworks Scottish Rally Championship title race.

The win gives them two maximum point scores compared to David Bogie and John Rowan's three, who retired from the rally on the second stage.

Hugh Brunton, with Drew Sturrock, scored his best gravel result to date ahead of a superb fightback from David Henderson and Chris Lees after two punctures on two stages. 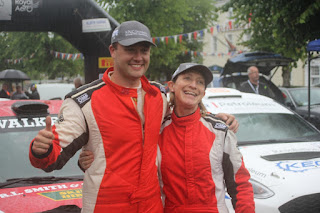 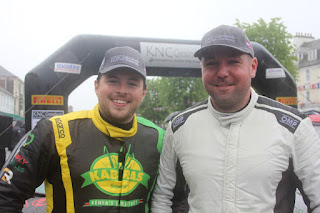 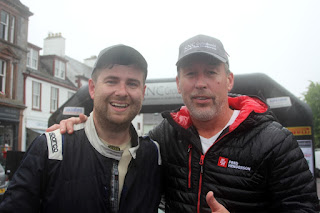 High speed motor show ... Here's hoping Gordon, Rory, Aiden and Dexter all finish in the top four of each of the BTCC races tomorrow at Knockhill, and we don't care which order! Gaun yersels boys. Tickets still available on line or pay at the gate ... 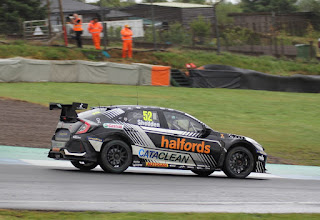 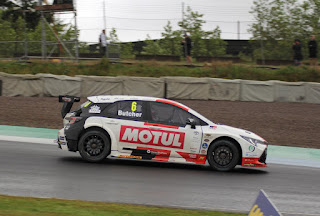 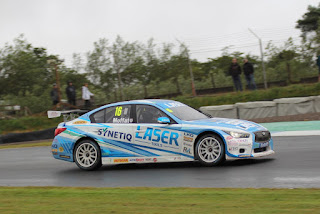 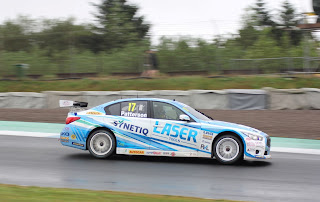 PaceNotes is not just an Irish rallying magazine for Irish rally fans. It's for Northern Irish, Scottish, Welsh and English rally fans too, and on Mull, Man and Channel Isles. Indeed, it's a mag for all of north west Europe.

Oh! Forget that, PaceNotes is for ALL rally fans. Period. Latest issue out now. 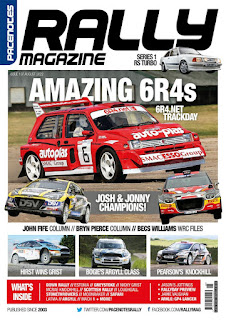 Perfect choice of transport for this week's visit to Knockhill for BTCC, and to cheer on Rory! 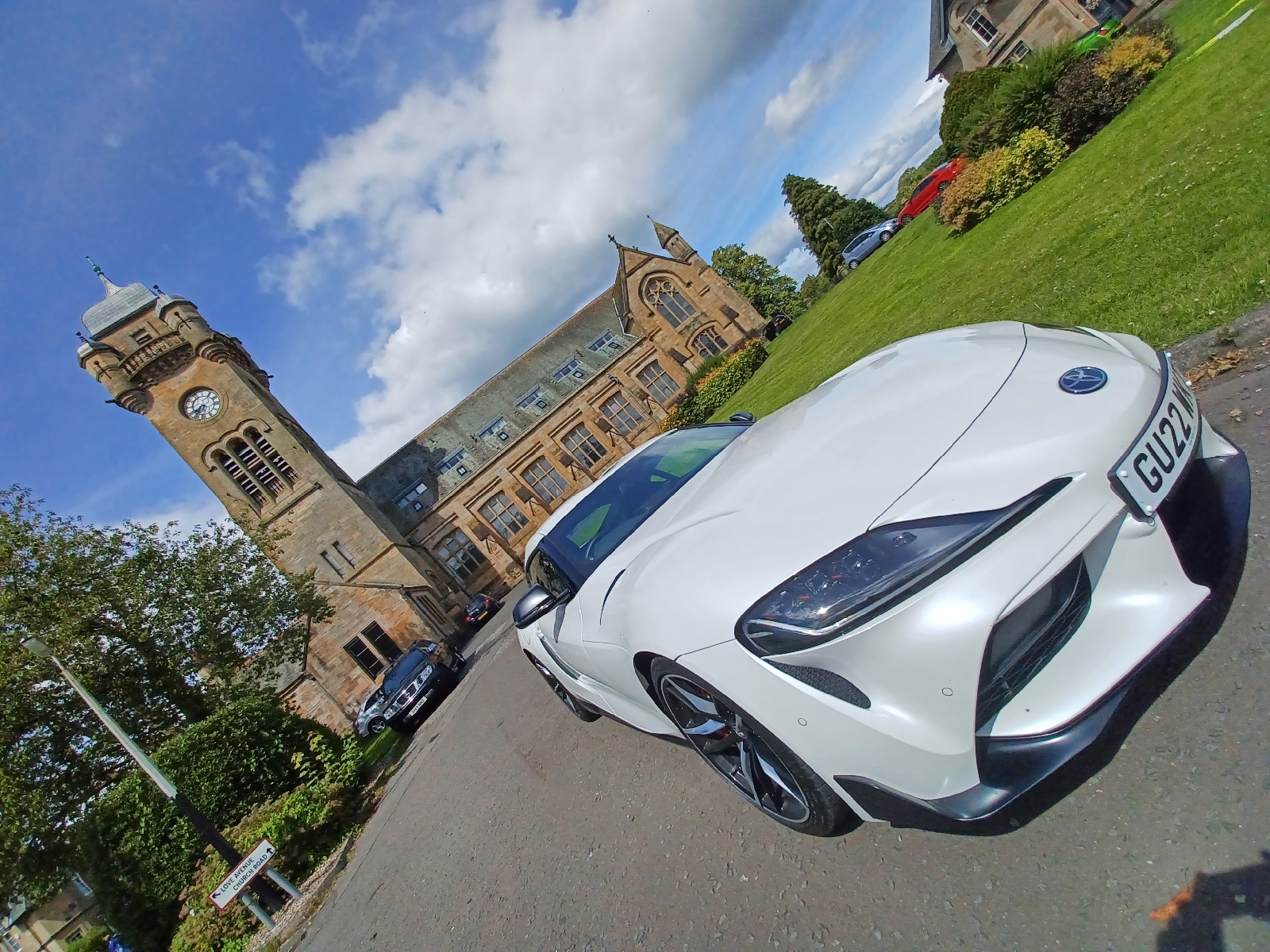 A trip round the service park of any Scottish championship rally provides a culinary and sometimes mouth watering trip through a huge variety of Scottish, and even foreign cuisine, with the tantalising smells of fry ups and barbecues mixing with the pungent aromas of hot oil and burnt clutches. All tastes and diets can be accommodated whether vegan, vegetarian or all day Scottish breakfasts. (Pic 1) 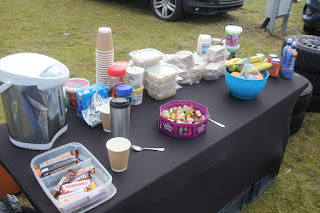 Everything from slices of Co-op black crusted bread with lorne sausage and a variety of toppings such as haggis, bacon, black pudding, tattie scone or fried egg (or the lot crammed into one Scottish morning roll) to pot noodles and pie sandwiches, chicken fried rice and crunchy salads, to tray bakes and cakes.  (Pic2) 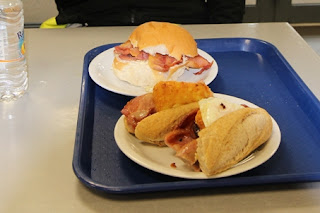 So with that in mind, when I encountered John Rintoul's 'spread' I was rather concerned about his dietary tastes and requirements. We all question his taste in cars, but this? Of course, to those of us with serious gastronomic expertise, brown sauce is infinitely preferable to the red stuff - but this combination? The lad needs help! (Pic 3) 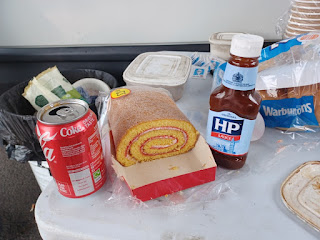 Maybe this lady could advise on a more balanced diet, eh? (Pic 4) 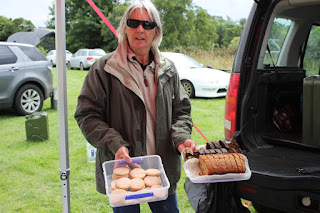