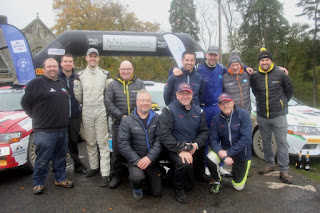 That's the main stage by stage report from the Carlisle Stages Rally now in the on-line mag. Garry Pearson and Niall Burns clinched the KNC Groundworks Scottish Championship titles on this final round in Kielder Forest, and this is how they did it.

A Horror film for Halloween 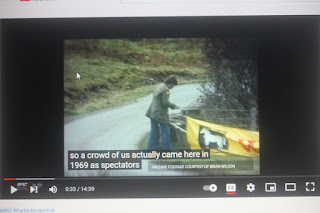 For those of you with a sensitive constitution it may be best to avoid this tale. Personally, I got a helluva fright the other night. There I was just catching up on some YouTube video and I came across the British Rally Championship filmed report on the 2021 Beatson's Building Supplies Mull Rally.

The film started with an aerial view of dark white capped waves rolling on to a desolate beach with a voiceover that was eerily familiar. Various shots of bleak and grainy island landscapes followed before the camera revealed the face of the voiceover. It was Chris Paton. Chris was one of the first Scottish rally drivers to discover the Mull Rally in 1970 and it was he who set the scene.

Way back in 1969, the call came out across the land for Marshals to officiate on a brand new event, the first Tour of Mull Rally, organised by a motor club from Lancashire in the deep south. Heeding the call, a band of hardy stalwarts from Lanarkshire Car Club led by Stuart Clink and other experienced off-roaders and 4x4 recovery specialists set sail for this little known isle to offer their services. Services which were indeed required as the dangers were manifold.

They returned full of tales of high speed pursuits, treacherous terrain and heroic rescues from this uniquely challenging motor sports quest. There were no stretches of two-lane blacktop back then, just miles of very narrow roads twisting tortuously around the rocky island landscape. And there did brave souls battle with their mechanical steeds against the dark and scary elements which made up this adventure little knowing then that it would enter the annuls of motor sporting folklore.

But back to the film, after the initial shots of the lonely beach and deserted roads there came into view a rather hirsute figure. One which would rival the lurid tales of Tam O' Shanter's witches and Highland banshees, it was the first public sighting of a 'Jaggy'. Indeed it was the late Drew Gallacher who first coined the term 'Jaggy Bunnet' following a Hackle Rally in Blairgowrie, but to most folk this sighting appeared to be a figment of whisky fuelled imagination, but there it was, captured on celluloid for posterity.

The film maker was most likely another Lanarkshire CC member, the late Brian Wilson, who was part of that small band who made that first foray on to the island with his cine camera. No doubt the BRC videographers who used these images to open this filmed record of last month's rally didn't realise what he had unwittingly captured. A rare sighting of this fabled figure.

Far from being a fearsome figure, the Jaggy was indeed a most helpful and benign spirit with one of his kindly acts recorded unknowingly as he erected a 'White Horse Whisky' banner ahead of the rally on behalf of the organisers.

It was just a glimpse, but there it was, incontrovertible proof. No wonder I was shocked, my Big Pal captured on film, engaged in peaceful pursuits. Honest, this is a true tale, the camera doesn't lie, does it?

It's not a long film, but if you have the stomach for it, here it is: 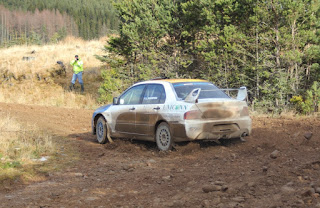 It wasn't that I was surprised by Eddie Kelly's recent announcement to 'retire' from the noble art of motor sport photography, it was surprise that it took so long, given the restrictions under which he and others like him have to operate these days.

The circumstances and events which he has described over recent months have been ongoing ever since the MSA introduced their new Media Accreditation scheme six years ago. Even then an assurance was given that the scheme would be kept under review. Nothing has changed, and this despite raising the issue with MS UK.

To give just one example. The Press Officer at a McRae Stages Rally event a few years back had agreed the locations where Eddie could stand along with the other event photographer. This was also approved by the Clerk of the Course and with the MSA Safety Delegate. On the day of the rally, the two photographers were in position as agreed until the Stewards drove through the stage ahead of the rally.

The Stewards stopped their car and one of them told the photographers they would have to move as they were in a vulnerable location, thereby over-ruling the very experienced event Press Officer, the licenced CofC and the appointed MSA Safety Delegate. Since they would not listen to reason the photographers had no choice but to move as prevarication would have delayed the rally. 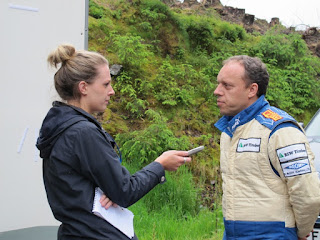 This episode highlights another issue regarding press and media attendance at events whereby different officials interpret and apply the rules differently. For instance some Marshals, Stage Commanders and Rally Officials allow journalists access to Stage Starts, Stage Finishes and some Controls - while others don't! Which makes trying to plan a day's schedule very difficult, and sometimes impossible.

Photographers face even more restrictions and they sometimes face the ludicrous situation whereby inexperienced officials determine which areas are safe and which are unsafe regardless of the experience and knowledge of the photographer they are dealing with.

Which brings us back to the MS UK Media Accred scheme. In the days of the MSA, the original scheme was abused by senior MSA and rally officials who would grant media credentials to VIPs, sponsors, friends, in fact anyone who didn't qualify for any other role. No wonder the profession lost respect. 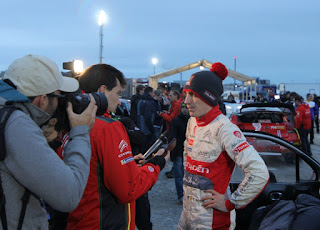 The present scheme is not fit for purpose, that's why many professionals do not sign up to it.

Rally photographers need a 'right to roam' and journalists need reasonable access to competitors and if MS UK vet the media applications properly then rally organisers and officials can be confident that those who turn up to work on their events will be responsible professionals and should be treated as such.

Like politicians and estate agents, not all journalists are obtuse. There is good, bad and indifferent in every profession. Eddie may not be the last one to call it a day.

With regard to the previous post reporting on the Carlisle Stages Rally, thanks to those who got in touch today. It seems that Jock Armstrong's retirement in Kielder was not down to an errant boulder as reported. Having been 'reliably' informed that the Fiesta had lost a wheel, it turns out that the engine had seized. Big difference, eh? My apologies to all concerned. 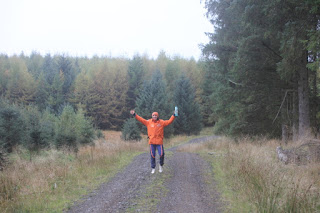 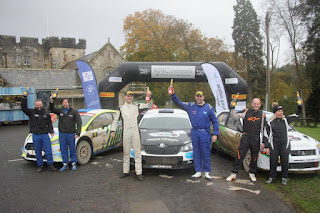 Garry Pearson and Niall Burns are the new KNC Groundworks Scottish Rally Champions. They led the Carlisle Stages Rally final round from start to finish to claim victory by over a minute from Stephen Petch and Michael Wilkinson. Scott Beattie and Paula Swinscoe finished 3rd overall and best of the Lancers when Michael Binnie and Claire Mole struck trouble on  the second stage bending a rear wishbone and they finished 4th.

Mind you, Garry's Fairy Godmother, or Saint Christopher, might have been riding shotgun in the Skoda. On the final stage, the car struck a rock without injury, but the when the Fiesta of Jock Armstrong and Cameron Fair struck the same rock it broke a wheel and put the pair out of 2nd place and out of the rally.

If Pearson's run was impressive, so was that of Niall Devine and Liam McIntyre gunning their GrpN Lancer with fading brakes into 5th place behind Binnie. If fireworks were expected from Freddie Milne and Patrick Walsh then maybe they got wet in the dreich, wet drizzle that sprinkled the Kielder greenery all day. Right from the very slippery first stage, Milne's Fiesta wasn't happy with a puzzled Freddie trying to find a suspension set up he was happy with.

James Wilson and Arthur Kierans were setting top three times till SS4 when the Fiesta went off the road while John Wink and Neil Shanks retired the Hyundai early on with a recurrence of its electrical gremlins.

At the rally finish Garry looked remarkably calm as he tried to absorb what he had just achieved. It looked as though his quiet elation was tempered with relief as the long sought success started to sink in.

"I think we won it on the first stage," said Garry, "We took 14 seconds out of Jock on the opening 14 miler at Wauchope and then just tried to manage that gap all the way to the finish." Careful and cautious were the watchwords: "We had 16 seconds on Jock going into the final stage, but I admit we did have a couple of 'slidey' moments near the start before taking it a bit more cautious, " and then added, "commiserations to Jock and Cammy, it was a good battle all year."

Apparently I was the first journalist in the UK to drive the new Kona N. Hyundai said this was the first one they had brought into the country and was fresh off the boat. Pure chance, or recognition of one's journalistic importance? I reckon it was just luck, but this 276bhp crossover is a wee wee firecracker. Eat your heart out Thierry Neuville! 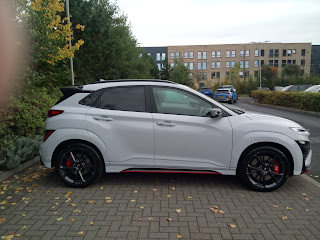 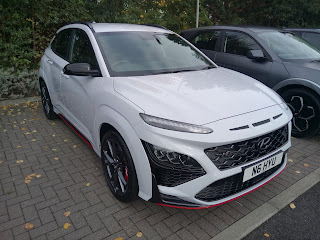 Road - Back to work

Yesterday was a good day... Today's not so bad either. The Scottish Car of The Year awards take place next month, hence a wee bit of a rush to assess and appraise all the qualifying vehicles before the deadline. Judging has in fact been an ongoing process during the past ten months but it seems that there are always cars to be fitted in at the last minute. The odd thing is, there are 15 motoring journalists on the judging panel - and we don't all agree. In fact quite a few have the sheer nerve to disagree ywith me, that's really odd, eh? Anyway, enough cogitating, back to work! 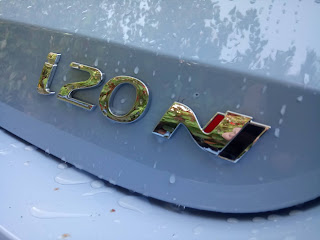 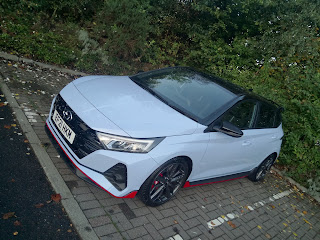 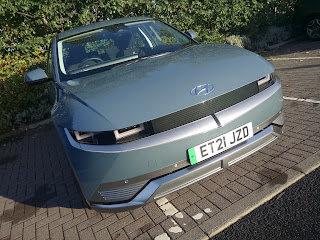 Job done, appraisal complete. I so want one. The end.

Just one ever so tiny wee drawback to the day's mentally taxing, hard graft, the awfy nice lady from Aston Martin wanted it back. No excuses accepted and all pleas fell on deaf ears. 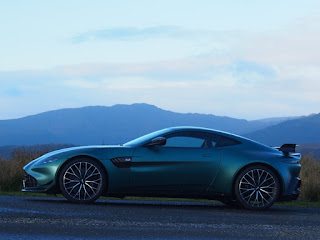 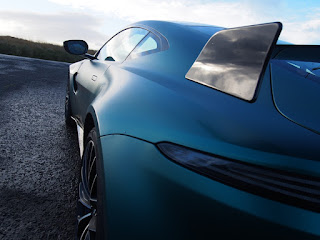 Life as a motoring journalist is tough, but some workdays are better than others - a whole friggin' lot better. Yee Haa... 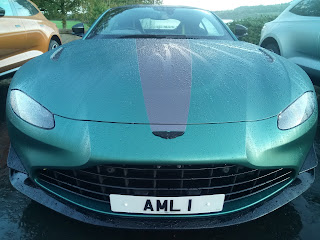 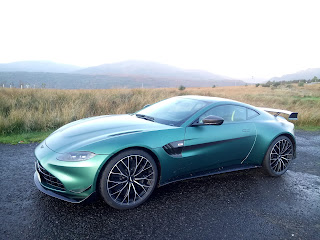 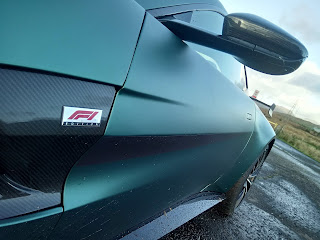