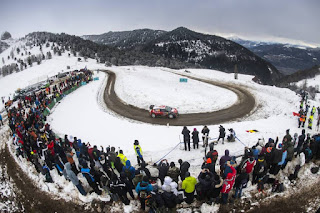 This year the Automobile Club de Monaco had made a notable effort to manage the huge crowds of spectators attracted to the Monte Carlo Rally. Spectator areas had been well marked out at all the popular public gathering points, but as at other events around the globe, it is the more remote parts of rally route where the 'bravado brigade' gather for their annual bouts of stupidity.


The Club had also created 'photographer pens' at these locations to try and curb the excesses of the more adventurous. This is a more contentious issue. The sport runs the risk of restricting the more artistic and imaginative photographers from capturing the moments that make us all gasp and wonder. 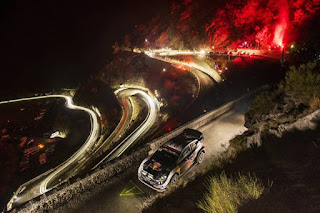 What we don't want - and the sport doesn't need - is a selection of very similar photos from the same location appearing in magazines, newspapers and the more reputable on-line publishing outlets. That's not what rallying is about, and it won't do the future development and promotion of the sport much good either


In this country, the current MSA scheme is far too restrictive and generates additional work for senior Rally route planning Officials and professional photographers. What is needed is a scheme which recognises and addresses the needs of  'official Press photographers' representing 'recognised publications' and separates these from the less experienced photographers and amateur publishing outlets seeking 'official' access.

At least two grades of qualification are needed, with the top grade requiring those on the lower level to qualify. Other major sports have successfully addressed the needs of the 'media' and rallying needs to do so too.

And to make the top grade more appealing and give the lower level an incentive to progress, the top grade guys and guyesses should have a limited, albeit controlled, 'Right to Roam' at rallies. It could be done.

The inexorable rise of social media has confused the original straightforward definition of 'Press' photographers, but just as spectators have to respect the much needed culture change so do aspiring photographers - and journalists too!
Posted by John Fife at 14:17 No comments:

If you thought last year's FIA World Rally Championship was uncertain and exciting, fast forward to 2018, and what do we have? Even more uncertainty and much more excitement. That is, if the opening round in Monte Carlo is anything to go by.

Friday was wet, slushy and snow-free, Saturday was the complete opposite (in places!) and on Sunday the forecasters just gave up while the weather gods chucked everything at the south eastern corner of France. And if it was bad for the rally cars, spare a thought for the gravel note crews running two hours ahead of the front runners.

What a huge responsibility to make the right call and report back to the teams? And who gets the blame if things go wrong? Through no fault of their own. The weather itself can change quicke4r than Superman in a phone box. Not only that, conditions can be polar opposites on one side of the mountain or valley to the other. Tyre choice? Lottery more like.

And what of the fans? Nutters, the lot of them. That's one thing that rally fans have in common around the globe. Sheer noisy delight when they see the cars, and mayhem when they see a trier. Trouble is, watching the antics of some of them on the TV coverage would have made sensible folk flinch in horror at their proximity to speeding cars which were on the limits of adhesion - and quite often beyond. Every driver spun at some point, and not just once, even Sebastien Ogier. Scary stuff.

Even so, defending FIA World Rally Champion Ogier made the perfect start to his bid to clinch a sixth drivers’ crown by scoring his fifth Rallye Monte-Carlo in a row on home soil.
The M-Sport driver began the final day 33.5 seconds ahead of the pursuing Ott Tänak first time out in the Toyota, and was immediately 11.5sec faster than the Yaris pilot on the first stage of the day. And there he stayed all the way to the finish.

“Rallye Monte-Carlo is a special event for me,” said Ogier, “I’ve always done well here – I seem to have a really good connection with my home rally – and I’m super happy to take another win. I've never struggled so much with tyre choice. It was all about trying to minimise mistakes, and I managed to make fewer than the others."

Having stopped to change a punctured tyre on the first day, team mate Elfyn Evans had his troubles too but scored sixth place: “It’s been a tough edition of the rally this year and we had an especially tough start losing so much time on the very first stage. Over the next few days I think we were there or there abouts in terms of outright speed, but overall there were just too many little errors. When it came to making the smart choices at the right time, we weren’t quite there and that’s what cost us a really good result today. The comforting thing is that the speed is there, but we still need to be better.”


The Power Stage was dominated by Kris Meeke, who salvaged some consolation for Citroën at the end of a troubled weekend with fourth overall while team mate Craig Breen lost out badly on the first day with brake trouble.
At the finish, said Kris said: "It was the hardest Monte-Carlo that I have ever experienced. We had everything: sheer ice on slick tyres on Thursday evening, rain on Friday, snow on Saturday and frost on the Col de Turini today. I'm surprised to finish the rally with seventeen points, but I'll certainly take them! We now have to stay humble and keep working hard to try and improve."

Craig Breen added: "The weekend got off to a difficult start, with our mistake on Thursday evening. And then things went from bad to worse with the brake problems on Friday, which left us opening the road as something of a snow plough on Saturday." 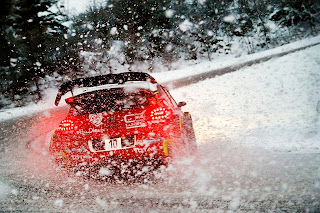 
Snow, snow, quick, quick, slow ... Our lot didn't quite fare too well at last weekend's Jack Frost Stages Rally with none of them in the top ten. The six stage event was based at Croft Circuit just a hop, skip and a jump over the border near Darlington but the weather forecast had put quite a few folk off. It was fine on the drive down on Saturday, but overnight and Sunday morning it snowed. Hard.

Even so, Darlington & DMC put on a fine show with Barry Lindsay first time out in a 4WD S2000 car taking the win from Kevin Proctor. Best Scottish result was Gordon Morrison and Calum MacPherson's 11th place overall in the Subaru, but this was not a day for heroics. James Gibb was next up in 15th, with (we'll never hear the end of it!) Shug Steel third best Scottish driver on the day. 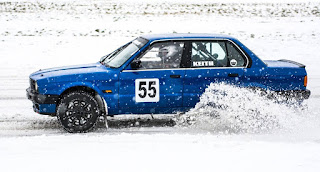 And if you're wondering why Mark McCulloch was way down in 32nd, just look at what he was driving while Jim Robertson had his first run out in a Mk2, quite a change from his normal FWD Citroens. Kevin Maguire and Drew Barker completed the finishers with Kenny Moore retiring the Avenger with electrical problems and both Finlay Retson and Graham Malthouse failing to complete all the stages.

(Photo courtesy of 'The Northern Echo')
Posted by John Fife at 10:27 No comments:

Top kerb hopper calls it a day - but only in Touring Cars. This morning Honda and Halfords Yuasa Racing announced that Gordon Shedden would be leaving the team ahead of the 2018 Dunlop MSA British Touring Car Championship and thanked him for his years of loyal service to the brand and team.

Gordon first joined Honda and Team Halfords back in 2006, completing three seasons for the squad in his initial stint, claiming ten victories and a best championship finish of third as he immediately made his mark in Britain’s premier motor sport series.

Earlier, Gordon said: “Today is a really difficult and emotional day for me. I can confirm I will not be competing in the British Touring Car Championship in 2018, which obviously means I will not be racing with Honda and Team Dynamics. They have been part of my life for the last 11 years and I have been made to feel a part of the family."

“Steve and Matt Neal gave me a chance in 2006, and we haven’t looked back since. From a Fiesta racer to a triple British Touring Car Champion, I could not have dreamed of the success we have achieved together. That success, along with Matt’s three championships, is a testament to the hard work, determination and passion that is intrinsic in the team. To Steve, Matt, [Technical Director] Barry Plowman and everyone at Team Dynamics I will be forever grateful, in particular my race engineer Eddie Hinckley, who has engineered my car since 2006! "

“I am very lucky to have had such a successful partnership with the team, Honda and all our sponsors.  We have been on a huge journey together, achieving multiple Teams’, Drivers’ and Manufacturers’ Championships. Along the way, we have had a lot of fun and created memories I will take and cherish forever. It may be the end of a chapter, but it won’t be the end of the friendships I have made.”

So what now for Knockhill's finest? Exciting news soon. Watch this space.
Posted by John Fife at 10:00 No comments: