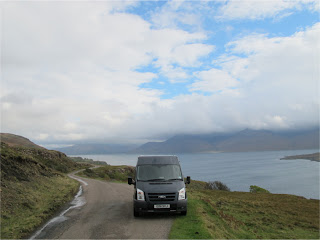 Just arrived at the capital of club rallying, Tobermory on the Isle of Mull. And it's dry. But for how long? It has tried to rain a wee bit so maybe it is practicing for a right downpour ahead of the rally start at 7 pm. That's 2 hours earlier than usual because after the traditional opener across Mishnish Lochs followed by the Hill Road an Loch Tuath, the rally heads to the southernmost tip of the island for two runs at Bunessan and two at Ardtun before heading north again over Loch Scridain, Gribun Rocks and round Calgary. In other words, it's going to be a long night for the 120 or so rally crews on this 42nd Mull Rally.

Bumped into Willie Bonniwell at the Corran Ferry, but he didn't have his Subaru Impreza, he was driving a 26 tonne Scania with 10 ship's anchors on it. "All my staff are at the rally," said Willie, "so I'm doing everything myself, including truck driving. Anyway the car's not out of the bodyshop yet. I rolled it at a charity rally day and the passenger thought it as all part of the 'rally experience'. A ball joint had broken and the car just dug in and flipped over. It will be next year before I'm back out."

Anyway, fingers crossed for a dry night. Last weekend was a right drenching on the RoS and the weekend before was a splungin' McRae Rally!
Posted by John Fife at 15:57