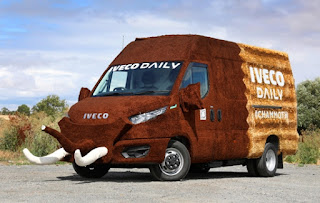 Not April 1st ... Nope, this is genuine. Starting tomorrow (19th Aug) Iveco will be touring England, Wales and Scotland with this hirsute Daily van to promote its CNG powered LCV. It can carry a payload of up to 1200 kgs and or swallow 18 cubic metres of stuff! And it can tow up to 3500 kgs.

The name comes from a combination of 'cheetah' and 'mammoth' to represent the van's agility and muscular strength.

But here's the thing, the Iveco Daily #Chammoth is also raising money for endangered species conservation with Iveco donating £1 to the Aspinall Foundation charity every time a member of the public takes a photo of the van and posts it on social media mentioning the hashtag #chammoth.

Mind you I can see a run on 'Head & Shoulders' stockists when the van passes through each area, but will it have to stop at a truck wash or a hairdressing salon to do the business?

The quaintly named 'Grab Life by the .. Hall's Stages' will take to the track at Kames, Muirkirk this Sunday 21st August and it promises to be busy with 16 stages and 30 cars and crews. The event counts towards both the Junior 1000 Ecosse Challenge for 14-17 year old drivers and East Ayrshire Car Club's own Championship.

Keith Cronin and Mike Galvin were the crew to beat on the Voyonic Grampian Forest Rally. With 5 fastest times from 6 stages, they cleared the field by 21 seconds although Osian Pryce and Noel O'Sullivan ran them close never allowing the winners to relax. Completing the podium line-up were Ruairi Bell and Max Freeman but James Williams and Dai Roberts were pressing them hard to finish just 8 seconds adrift in 4th place. Jason Pritchard and Phil Clarke completed the BRC line-up just ahead of the Scottish Championship crews.

Taking maximum KNC Groundworks Scottish Championship points were David Bogie and John Rowan and things were tight here to with David Henderson and Chris Lees only 17 seconds behind at the finish. Storming through to snatch third were Hugh Brunton and Drew Sturrock as John Wink's Hyundai suffered turbo trouble in the final stage and he and Neil Shanks dropped to 10th place  behind Alan Carmichael and Arthur Kierans.

Mark McCulloch is continuing to get to grips with the Proton as he and Michael Hendry were 11th ahead of 12th placed Angus Lawrie and Paul Gribben scoring top Challenger points. in 12th place.

It was good to see both Willie Paterson and Tom Hynd back at Crathes before the day was out although each had a few cracked ribs by all accounts. Tom was released from hospital after a complete check-up in the afternoon and Willie was released that evening. Mind you some folk were less than kind, trying to make them laugh and then watch them wince when they laughed. Such cruel 'friends'!

Michael Binnie and Claire Mole retired on the first stage when the Lancer slid off the road, Jock Armstrong and Cammy Fair retired the Subaru with no oil pressure, Bruce McCombie and Michael Coutts lost out on a top six placing when the Focus failed them in SS3, and Garry Pearson’s BRC title hopes took a dive when he and Dale Furniss left the road on the penultimate stage. 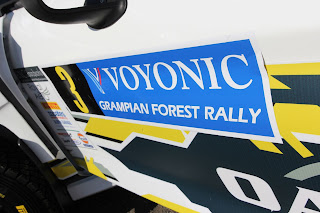 After a long hot and very stoory day in the Aberdeenshire forests, Keith Cronin won the Voyonic Grampian Forest Rally by 21 seconds from Osian Pryce. Rhuairi Bell, James Williams and Jason Tauber completed the top five British Championship contenders with the first of the KNC Groundworks Scottish crews in 6th place, the Fiesta Rally2 of David Bogie. David Henderson was only 17 seconds behind him at the finish with Hugh Brunton scoring an excellent result in 8th place. Alan Carmichael was 9th with John Wink taking a superb 10th overall just hanging on when the Hyundai’s turbo boost failed in the final stage.

Mark McCulloch was 11th with Angus Lawrie scoring top Challenger points in 12th place, although it has to be said that the BRC crews were allowed to recce the stages on Friday and the Scottish Championship crews were not. On that basis our lot did remarkably well.

The day was marred by a nasty accident to Willie Paterson and Tom Hynd who rolled the Lancer on a long right hander which tightened, the car coming to rest almost out of sight of the road down a banking. Both crew members were taken to Aberdeen Royal Infirmary for a precautionary check. Apart from cracked ribs (safety harness) they both appear be OK. Tom was released this afternoon and Willie is being released this evening.

Slightly better off were Michael Binnie and Claire Mole when the red Lancer took them for a wild ride through the shrubbery and trees on the first stage of the day coming to rest parked on a steep banking. Both crew members OK.

Garry Pearson’s title hopes also took a dive when the Fiesta left the road on the 5th stage out of six and Jock Armstrong retired the Subaru with no oil pressure. 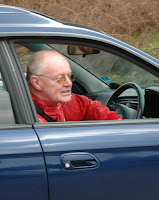 It's a name that won't be familiar to most of you, especially since you wouldn't want to meet him whilst he was carrying out his official duties, but Dr Jack McKellar was one of the first doctors to get officially involved in the early days of stage rallying. Long before safety plans, or even safety on rallies, Dr Jack was amongst that early band of medical volunteers and enthusiasts who turned out in the late 1970s, from the Snowman in the north to the RACV Rally in the deep south, to help the amateur clubs who were organising those early stage events.

His 'day-job' was in fact, consultant anaesthetist at Stobhill Hospital in Glasgow (which closed in 2011) and he also managed to fit in once or twice a month surgeries in Oban. That also provided him with an excuse for driving. His first car was a Mini Cooper S and that was followed by a succession of E Type Jaguars. In fact, he competed on a few hillclimbs before common sense prevailed, as the car was also his daily driver.

In those early days doctors would turn up and hang around rally HQ waiting for the call from a telephone box in the wilderness or a radio message saying that medical intervention was needed somewhere and they would then respond. Jack would jump into his Saab 900 Turbo and disappear to render such assistance as was necessary. Given the nomadic nature of the sport something more was required and the FIA issued a stipulation that such events should have a doctor on standby at each stage. This meant additional work as more qualified volunteer medics needed to be found. 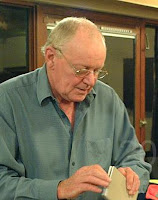 After years of volunteering his services to car clubs and events around Scotland, including the fledgling Tour of Mull Rally as well as the endurance style International RSAC Scottish Rally, as it then was, in 1987 he was appointed Chief Medical Officer for 'the Scottish'. He took over from the RAC Rally's Yorkshire based CMO, Dr John Blomfield, as the RSAC wanted a Scottish doctor in charge of Scotland's premier event.

Of course, Jack knew the ropes by this time but John was a great personal help in establishing and formalising a medical support network and the creation of safety plans. Things have moved on tremendously since those days and safety is now an integral part of planning such events but right up until 2009 Dr Jack was still volunteering and he was still CMO on many events including Mull.

But his expertise and volunteering stretched much further than 'home' events as he even provided medical assistance on events such as the Camel Trophy, that huge adventurous marathon covering thousands of miles over and through the most inhospitable terrain across numerous continents. Although this event had been running since 1980, it wasn't till 1986 that Great Britain entered any teams. Dr Jack needed no more encouragement and he signed up.

Rallying aside, Jack also enjoyed the more convivial and social aspect of the sport when organisers would gather together after an event to discuss what had gone wrong, how it could have been better handled and what could be improved for future events. Such 'debriefs' were often accompanied by the consumption of a soothing nectar distilled from the produce of Scotland's barley fields, and Jack was in his element, although rarely to excess - the day-job was never too far away. 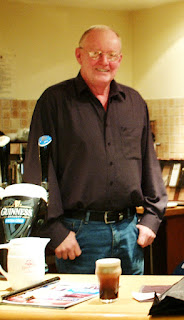 Less well known was his skill at the piano. He could often be found 'tinkling the ivories' if the Rally HQ hotel had such an instrument, but his father apparently didn't want him to become a 'musician' hence the medical qualifications!

He retired from the medical profession sixteen years ago and later moved from his home in Drymen to his wife's original homeland in Northamptonshire. Shortly afterwards he suffered a stroke. He passed away last week after a prolonged illness, a sad end to such a fulfilling and vibrant life.

Given his extensive support of Scottish, and international, rallying over the years, there is perhaps one simple story which reflects his commitment to the sport in Scotland and beyond. Thirty years ago a rally organiser phoned Stobhill Hospital and asked for Dr Jack McKellar, to which the switchboard operator asked: "Does he still work here?"

Yup, he was a one-off. Our condolences to Zenda and the family. 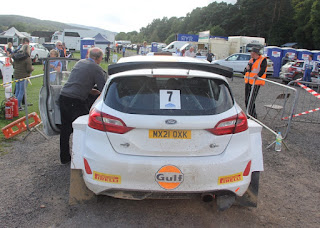 Full entry list and link to spectator information for this Saturday's (13th) Voyonic Grampian Forest Rally now in the on-line mag ... The Stonehaven & DMC organising team have arranged two spectator viewing points furnished with with loos and internal culinary replenishment facilities at which cars will pass twice during the day. With over 80 cars in the entry list there's a helluva battle in prospect between two lots of championship contenders hellbent on scoring points.

With a full supporting cast of Scottish triers, it's just a pity the BRC couldn't muster more than 13 crews to make the trip to the land of mystifying weather, voracious midges and constantly running deep fat fryers ... 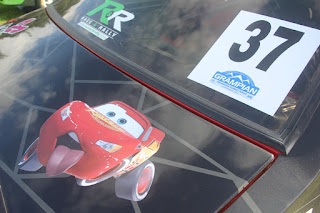