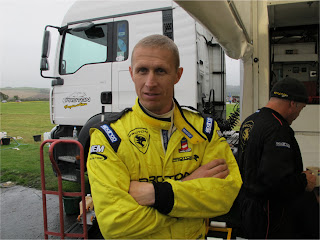 Just spoken to a disconsolate Alister McRae at service in Perth. The Proton is still up on axle stands but it doesn't look as though it will make the 'SuperRally' re-start tomorrow. Team principal Chris Mellors was quite eloquent, and also quite succinct: "When you lose all the oil at 8500 rpm, it doesn't do the engine much good!"

Alister said it was just bad luck: "We caught a stone with the edge of the sumpguard and it just whipped the sump plug off. Anywhere else and it would have been fine. It's a great pity. The car was going well, although I was just trying to build my confidence up in Drummond Hill ready for an attack on Errochty. I didn't think the stages were bad or rough, just slippy. Drummond Hill was really slippy. I didn't think it was rough or cut up, but we just caught a stone in the wrong place, and that was it."

RoS hasn't been good to the Scots so far, although David Bogie is still going and going well, but Ruary MacLeod has been off in the Fiesta: "We just slid into a tree in Drummond Hill," he said, "it pushed the door in and bent a TCA, and we had to drive Errochty not able to use full lock to get back to service and get it fixed. But we've softened the suspension and cut the tyres so we're ready for a push tonight."

Peter Taylor broke a driveshaft in the Clio and so too did Alex Laffey in the Fiesta, although Alex had a puncture at the time as well.

John MacCrone is going well in the Fiesta too. Night driving comes naturally to him having been reared on Mull Rallies, but rallying in the dark in forests is quite different! Anyway, fingers crossed that he gets a result this weekend, he needs it.

The National Rally entry has now joined on to the back of the Internationals who are going out for their second loop of Craig, Errochty and DH in that order, so goodness knows what conditions will be like for the clubmen when they get there..

The rain looks as though it's now on for the night, and reports from the field suggest that the mist is getting thicker over the high ground. That, as well as darkness, is going to sort out the men from the boys tonight.
Posted by John Fife at 01:09