I don’t know if many of you managed to read that press clipping from the 1972 Jim Clark Rally in Motoring News as featured in the previous post, but it contained a wee gem of a story. Crucially, not the whole story. It concerned the fate of Valerie Carlaw who was being navigated by one Johnstone Syer Esq and who incidentally later became Andrew Cowan’s regular navigator.

On Stage 7, Valerie was caught out by a yumpy straight on the Falstone test and rolled her Cooper S four times. She didn’t finish the rally.

However, what the MN reporter failed to record in his report was the brief conversation that ensued at the outset of this incident. Apparently as the Cooper S left the road, dug its nose into the turf and started rolling, Valerie was heard to utter: “Oh, f*ck me!”

To which came the considered and laconic retort from the left hand seat: “Can ye no wait till the car stops rolling?”

Makes you wonder if we’d get away with reporting such intimate conversations these days, eh?
Posted by John Fife at 22:55 No comments: 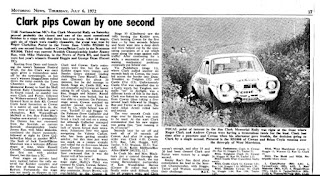 My big pal Jaggy  was all set to retire from the world of Scottish rally reporting at the end of last season and let it be known to a few close friends and acquaintances. The idea was to attend the return of closed roads to Mull and then just fade away, but those he conversed with had other ideas.

Some were supportive, others were dismissive whilst quite a few asked awkward questions, like who would report on those competitors that other titles and outlets ignore? The clubmen and women further down the entry lists.

Not just the victors and class winners, but those whose targets are more modest, like improving and getting faster than their last time out or just getting round in one piece. It could be argued that the young and ambitious, the midfielders and the tail enders are more important than those at the front, for without them, the front runners wouldn't have a rally to contest!

Since then a few folk have had a serious chat with the big lad and he's swithering. That was followed by the bombshell that 'Motorsport News' was sold. Surely that was the final nail in the deflating tyre.

Then the phone rang. It was the Editor of 'Motorsport News'. The title had been bought by Kelsey Media and the word 'investment' was used to persuade the Editor that there was renewed hope for the UK's last remaining national weekly motorsports title. The Editor is staying with it and he asked if their northernmost rallying correspondent would stay too!

It's too early to say what the plans are, but here's hoping that the weekly paper can resume its rightful place informing, educating and entertaining Britain's rally and club motorsport fans.

Coincidentally, with Andrew Cowan's memorial service taking place this Saturday, I came across this 'Motoring News' clipping from 1972. It was a report on the Jim Clark Rally which featured an epic duel between Roger Clark/Jim Porter and Andrew Cowan/Brian Coyle, a duel which Clark won by ONE second from Cowan.

I don't recall who the reporter was. In those days MN only used the author's initials, in this case, 'RJT' and the photographer wasn't mentioned at all. However, I do know who that photographer was - an incredibly artistic, talented and gifted young man who had only recently started taking photos and writing short reports for MN.

I wonder who that could possibly have been, eh?
Posted by John Fife at 15:46 No comments: 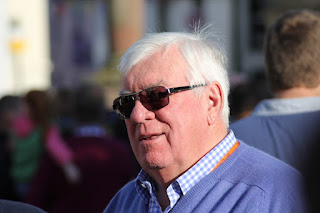 There will be a memorial service for Andrew Cowan in Duns this Saturday the 1st of February at 1 pm.

The venue is the Duns Parish Church (PC - TD11 3DD) just off the A6105 at the eastern end of the town centre. Parking is limited in the town centre and around The Square, and since a large gathering is being anticipated additional parking arrangements have been made at Duns Primary School, Langtongate (PC - TD11 3QQ) which is just inside the town boundary on the A6105 western approach to Duns. It's just beyond the new High School so it's easy to find. A shuttle bus service between there and the church has also been arranged.
Posted by John Fife at 16:30 No comments:

John Cowan's funeral will take place at Stirling Crematorium at 1pm this Monday, 27th January. The full address is Falkirk Rd, Bannockburn, Stirling, FK7 8AH. That is on the old A9 which runs from the south of Stirling to Plean village.
Posted by John Fife at 15:36 No comments: 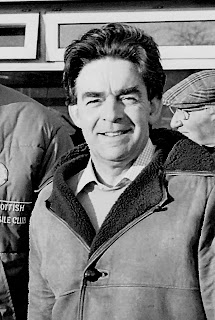 Sadly, John Cowan passed away last week. Not a name that will be familiar to many of you, but a sad loss to Scottish motor sport, particularly to rallying. He was one of those who worked tirelessly in the background helping to create the sport that we all cherish and enjoy today.

A Civil Engineer by profession and a lifelong member of 55 Car Club by choice, he was part of the team which introduced the concept of using forest roads as rally stages with the club's Hackle Rally being one of the first events in the UK to use a section of Forestry Commission road as a Special Stage in the early 1960s.

In fact, 55CC were already using a stretch of 'forestry gravel road' behind Blair Castle for their own event when the 1960 RAC Rally inserted a 1.8 mile stretch of Forestry Commission gravel road as a timed test in their route for the first time. That was in Argyll, and its success led to the introduction of  200 miles of FC roads for their event the following year in 1961.

By that time, 55CC were already incorporating more FC road tests in their own Hackle Rally as other clubs and organisers followed suit.

Throughout that period, John was involved in the marshalling and organising of a whole range of competitions within the club culminating in him becoming club President.

In 1995 he was awarded the 'Pentti Airikkala Trophy' for his efforts. Presented annually by the RSAC this award recognises the efforts and achievements of those who work behind the scenes, often thanklessly and anonymously.

Perhaps surprisingly, and unlike motor racing Clerks of the Course, those in rallying did not need to be qualified or licensed, merely appointed by the organising team, on the basis of ability and experience. As the sport grew in popularity and the rules and regulations grew in complexity, the RAC Motor Sports Association (as it then was) recognised the need to formalise this senior post within the sport.

This was a move welcomed by John who worked with the RAC MSA, then the MSA, and who became a Club Steward and MSA appointed Steward on events, passing on his advice and guidance to a new generation of organisers.

Whilst you won't see his name recorded in newsprint columns or on many trophy plaques, it was commonplace in car club committee minutes, Association notes and MSA paperwork. One of the silent minority perhaps, but one whose influence was felt nation-wide.

For sure the sport will miss him, but none more so than his wife Eileen, sons Keith and Kenneth and  daughter Nicola, and their wider family and friends. Our heartfelt condolences to them all.