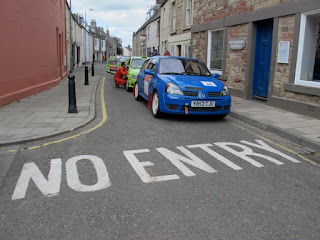 With the public consultation part of the proposed 'closed roads' legislation now completed (at midnight on Monday 28th Jan) I wondered just what sort of response Transport Scotland had to their appeal for feedback. Naturally I asked quite a few questions, but I got only one solitary response.

A Transport Scotland spokesperson said:
"We have received in excess of 3,700 responses to the Motorsports on Closed Public Roads consultation.  We are currently in the process of analysing this encouraging amount of feedback and plan to publish a report in the coming months.”

That is a huge response by any standard or measurement, especially in light of the fact that the Welsh Government only got a total of 76 replies to their public consultation. However, it then took them some ten weeks or so to publish their own report on their Consultation findings, so it will no doubt take the Transport Scotland team a wee bit longer to wade through this lot!

It would appear (from other sources) that the majority of returns were favourable. However, that would imply that there were still quite a few unfavourable replies. That means there is work yet to be done by motor sports to ensure we keep the general public onside.

Not that I am suggesting for a minute that there was a concerted campaign against this proposed new legislation, but there is a significant minority within the Scottish Parliament who are against anything petrol and diesel powered. They might well harbour a desire to single out motorsport as a particularly high profile example to vent their objections. No doubt these same folk will come up with other arguments against electric cars too, so we have to be  on our guard.

However if you do come across such objectors, there is a simple argument to pursue. It's a fact that every sport and pastime uses road transport directly or indirectly, be it to carry competitors and fans to and from venues, or to transport materials. For instance, running and golf shoes don't walk into sporting goods stores and balls don't bounce into, or over, nets on their own. Taking this into consideration, motor sport is a very small part of the total miles covered each year by all sports and their participants and followers.

Then of course there is the wider issue of power consumption for machinery, floodlights, equipment and electronic scoreboards, not to mention the construction of arenas, stadiums and other facilities. Nope, we're ALL in this together.

If we have to cut back, then so has everyone else. However, I have asked Transport Scotland to be kept informed. When I do hear anything further, I'll pass it on.
Posted by John Fife at 16:39 3 comments: 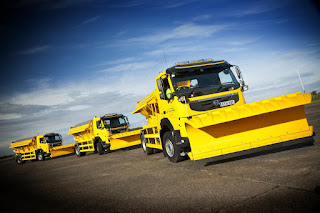 When the snow falls, water freezes and anxiety levels increase in drivers, there is little more comforting and welcoming than the sight of a flashing orange beacon on top of a big yellow truck spreading grit on the roads.

A multitude of road accidents  across the central belt last week heralded the arrival of the first real snows of winter so far, and despite all the previous warnings of past years, folk still keep a-slipping and a-sliding.

If there is one surefire, effective way to get a serious message across to folk, then do it with a smile, and that's just what Traffic Scotland is doing with their 'Trunk Road Gritter Tracker' available on all good smartphones, tablets and laptops.

Log on and have a look. TS is showing in real time where the gritters are and where they have been, and  using a trail of colour coded dots show how recently certain roads have been gritted or are currently being gritted.

Yes, it's a bit of fun, but for those of a nervous disposition who are venturing out in low temperatures, a quick look at the Traffic Scotland website will do much to inform, advise and reassure. And they do it with a smile, as some of the gritting crews have named their trucks and these are highlighted on the 'live mapping'.

Some have 'sensible' and obvious names like Snowball, Frosty and Salty Tom, whilst others are called Sophie Salt, Mrs McGritter, Slippy McGritty and Gritty McVittie. But the best ones include names such as Grittest Hits, Grittle Mix, Spread Sheeran, and my favourite Sprinklebell. Gaun yersels guys 'n'gals - grit and spread it.

Well, it made me smile.
Go on have a look: https://bit.ly/2fgIL9V
Traffic Scotland website: https://trafficscotland.org/wintergritterinfo/
Posted by John Fife at 15:00 No comments:

Some stars shone brightly and some sparkled briefly, while others twinkled before being extinguished over the French Alps at the weekend on the opening round of the World Rally Championship, the Monte Carlo Rally.

Two seconds separated the top two after an exuberant, gut churning, high speed alpine thriller and it would have been closer still, but for a first day puncture for third placed Ott Tänak.

Despite the change of mount, Sebastien Ogier simply did what he does best and even a mechanical glitch on the final day couldn't stop his Citroen with Thierry Neuville taking second place in the Hyundai. Completing the three different marques in the top three places was Tänak in the Toyota, but what about that man Loeb? Fourth place first time out in the Hyundai - and after minimal testing!

As for the Brits, there were just two in the top ten, and both posted hope for the future. Kris Meeke finished with a flourish in sixth place despite a puncture and suspension breakage on the first day and rounded it off with fastest time on the final day's Power Stage. And didn't Gus Greensmith do well?

At the finish, Kris Meeke said: “To win the Power Stage was an incredible way to finish our first rally with TOYOTA GAZOO Racing. We only set one fastest time this weekend but we did it when it counted. Other drivers were still fighting for their positions until the end, so to put it on the line and come away with the five points is great. We had technical issues this weekend that affected our result – fourth might have been possible – but to show our speed is really nice. The feeling with the car is really good. Finally, everything seems to be coming together for me, but we’re only one rally in, so we have to stay concentrated now and look forward to Sweden.”

Finishing 7th overall in his Fiesta R5, and winning both the WRC 2 Pro and RC2 classes, Gus Greensmith commented: “I’m pretty sure this is the best day of my life so far! It took us a while to get here, but it’s an amazing feeling and there are so many people I need to thank. It was almost a perfect rally from beginning to end and we did everything we needed to do. When we needed to push and build a gap, we did. And when we needed to control it, we did. It’s definitely been my best ever performance behind the wheel, and now I’m just looking forward to a beer and letting it all sink in!”

Rhys Yates also scored a superb result finishing 14th overall in his Skoda Fabia, but for Elfyn Evans, one slip on black ice meant disaster. Elfyn said afterwards: “Stage 9 started off okay, but we picked up a puncture which was pretty unlucky. It was on the rear in a cut that everyone else had been in. It was just one of those things, and we made the decision to continue which I think was right in terms of time. Then on the next stage there was a pretty straight forward left-hander that’s been around for a number of years. I didn’t approach it any differently to how I usually would, but it seems as though the grip levels were particularly low. “Maybe there was some black ice as a few cars got caught out, but they were a lot luckier than us. There was quite a steep bank with some trees on the outside, the car got dragged down, and that’s where our Rallye Monte-Carlo came to the end.”

This consultation is seeking the opinions and views of anyone, not just rally fans specifically, and not just motorsports followers either, but everyone. That means that those who might be opposed to such ideas can have their say too, and there are indeed many detractors out there. For that reason it is important that those who participate in and follow all forms of motorsport submit their own views.

The on-line questionnaire asks just 9 questions and is easy to fill in so it won't take long, unless you get carried away, but state your case and keep it brief. If you haven't completed the form or know anyone who hasn't then please do it and urge them to do it today or tomorrow. Tuesday will be too late.

I have no idea how many submissions Transport Scotland has received so far and we won't know that for 2, maybe 3, months depending on how Government and the civil service are sidetracked by Brexit and Scotexit/Scremain manoeuvrings!

It would appear that from the number of confirmations notified on this social media page alone that number should exceed 250.

That compares extremely favourably with the response to the similar Wales public consultation  process for their Closed Roads for Motorsport consultation two years back. They got 76 responses - in total!