Many thanks for all the kind words and good wishes received over recent days, both private and public. In fact, the mail and comments received over recent postings have reinforced my view that there is a need for a single source of rallying information in Scotland. For sure, 'Motorsport News' does its best, but it can only cover so much. It keeps us up to date with the international and national stuff, but can't do justice to the grass roots and club scene. That's not a criticism, just a plain fact.


So I have made a decision to introduce a weekly newsletter. I suggested this idea a couple of months back and have been working away on the concept since then encouraged by positive feedback. On that basis I am aiming to launch it next month. It will be subscription only and it will be of primary interest to Scottish enthusiasts. Not that I'm racist, but I couldn't hope to cover the English, Welsh and Northern Irish scene as well. The cost will be 12 quid per year for a weekly Newsletter, that equates to 25 pence per emailed issue per week. More details will be issued shortly - so don't panic, you haven't missed anything  yet.


As to the title, I have decided on 'The Bunnet Bulletin'. That lets you know it will be informal and opinionated, as well as informed and educational - hopefully!


Some of the younger readers may wonder where the 'Jaggy Bunnet' name came from and why. There's one simple reason, it was the nickname given to a young, impressionable and starstruck journalist by someone he regarded as a real star of the forest stage - Drew Gallacher.


It happened at the end of a Hackle Rally which finished in Blairgowrie way back in 1972 or '73. Although employed by Shell, the youngster was also working for the weekly free-sheet 'Scottish Motor News & Advertiser' which had an office near the Shell building in Glasgow. After the party, the crews and stragglers staggered back to hotels and guesthouses in the Perthshire town and it just so happened that the Shell boss, Bill Houston and his staff (including yours truly), were staying in the same hotel as the Gallacher entourage.


Drew was reluctant to return to his room for two reasons. There were already about 11 folk in his double room, designed for two occupants, sleeping off a drunken stupor amidst a cacophony of assorted snoring and snorting which was shaking the rafters. They were sleeping on the bed, floor and on the window sills of the bay windows, and there was a new fangled invention in the public bar, a snooker table. Hard to believe now, but in those days bars were for serious drinking duty only, not playing games. Cards and dominoes were not considered games. That was table warfare! Anyway, at that time, this was the first such table to have escaped from the big city of Glasgow and Drew challenged me to game.


Bad move. It was already gone midnight when we started playing. Two rank amateurs battering balls around the green baize. I have no idea how many games we played in those early hours, but I was managing to stay ahead. Each time he drew level I would win a few more games. Unbeknownst to me, the big devil was so bluidy competitive that he wasn't going to his room till he beat me. It got so serious at one point that I turned my bunnet backwards so that I could lean closer to the cue and the baize. That was when he said: "Weel done Jaggy Bunnet".


For a man whom I regarded as such a big name and revered as a big star to give a wet-behind-the-ears youngster a nickname put a spring in my step. I never forgot it and the name stuck.


Hence 'The Bunnet Bulletin'. So now you know.
Posted by John Fife at 13:26 No comments:


It has almost become something of a tradition this side of the rallying border, that a certain J Bunnet Esq issues his own festive statement to the nation just like the politicians and the Queen's speech on Christmas Day - that's Queen Liz by the way, not Queen Nic!

The tradition was no doubt started by said parsimonious personage to save the cost of stamps (13 shillings in real money for 1st class these days!) so here below is Jaggy's comment on the year past and his hopes and wishes for the future.  And if you haven't yet got a Christmas card from him, this is it. 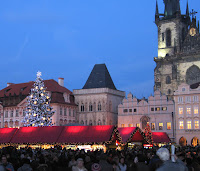 (( Note: Photograph taken at the Christmas market in New St Even’s Town, a quaint hamlet in McRaeshire, home of the Laird of MacHanical Mayhem himself, J Bunnet Esq ))

Things looked grim at start of year
Our sport was under threat
Queen Nic from Holyrood was on our case
Upon us, a civil servant she did set

The M.S.A. was called to act
Plus many helping hands
Car clubs and foresters all pitched in
To meet the Queen’s demands

Our thanks to all for efforts made
And the staff of M.S.A.
( Those fellows of MacScrooge Academy
as they are better known by the way)

So let’s leave the final words
As stated in a film anew
By my Star Wars pal Smokeybaccy
“May the forests be with you!”

Wishing all of youse awrabest, from all at Castle Bunnet

The team will contest a selected number of events next year with different drivers including their latest signings Craig Breen and Scott Martin.

Khalid Al-Qassimi, Chairman of Abu Dhabi Racing explained: “After a successful three-year partnership with Citroën, we are pleased to maintain our presence in the WRC. It’s a programme that has been approved by Citroën Racing and which benefits from the expertise of PH Sport. As lead driver, Kris Meeke will contest several rounds, whilst prioritising his development work with Citroën Racing. We will also be aiming to provide opportunities for talented young drivers from the PSA Peugeot Citroën group. Supported by the expertise of the team, they will be able to add to their experience and show what they can do.”

Two DS 3 WRCs will be entered at Rallye Monte-Carlo with the lead car being crewed by Kris Meeke and Paul Nagle. This will be the seventh appearance here for the Northern Irishman, whose best result was a third place finish in 2014. In the second car, Stéphane Lefebvre will make his competitive debut alongside new co-driver Gabin Moreau.

Three cars will then be entered at Rally Sweden (11-14 February) for Kris Meeke/Paul Nagle, Khalid Al Qassimi/Chris Patterson and Craig Breen/Scott Martin. The Irishman will be making his debut outing in the DS 3 WRC, but he will have the advantage of competing at a rally he really enjoys. After two good performances in the Super 2000 category cars in 2011 and 2012, he secured a top-ten finish in 2014 on his first outing in a World Rally Car. Kris Meeke finished seventh overall in Sweden last year, whilst Khalid Al Qassimi’s best result was tenth place in 2011.

“Being able to contest a certain number of rallies in 2016 was important when deciding about my future,” reiterated Kris Meeke. “I would therefore like to thank Abu Dhabi, Total and all the partners who have made it possible for us compete in very good conditions at these events. This programme will enable me to keep my hand in as regards racing and continue to learn about the WRC events. From that point of view, it seemed essential to compete at Monte-Carlo. It is such an unpredictable rally, where experience counts more than anywhere else. I can’t wait to get back into the car for pre-event testing to prepare for this first race.”
Posted by John Fife at 17:26 No comments:

I spent a bit of time thinking about this before sharing it with you, but having sought permission I took a photo at yesterday's funeral. Through the rain streaked glass can be seen Robin Christie's hat and the steering wheel from his Chevette. Lovely thought, and very touching. Long before Indiana Jones and Crocodile Dundee made the drover's hat fashionable, the Gallowegian cut an unmistakable figure in his weathered and frayed headgear.

Many visitors to the Scottish Rally Championship and other events over the years have often remarked on the friendly atmosphere which is somehow at odds with the fierce competition on the stages. That's down to folk like Robin and other characters who make this sport what it is. It's not just about the cars and the action, it's the personalities who add banter and laughter all the way. He'll certainly be missed.

As for yesterday, all it needed was a Land Rover in the back to complete the ensemble! R.I.P. Robin.
Posted by John Fife at 09:55 No comments:

Citroen has signed up Kris Meeke on a 3 year deal to help test and develop their new WRC contender - with a few rally outings thrown in!


Funeral details are as follows:

10:30 - Masonhill Crematorium Ayr, KA6 6EN
On the A77 at Ayr, At Holmston Roundabout take the exit on to the A70 signposted Cumnock, Dumfries, Crematorium. Pass Dobbies Garden Centre on the left and then turn right to the Crematorium (signposted)

Any donations to Marie Curie Nurses.
Posted by John Fife at 15:25 No comments: