Having got back from Rally of Scotland very late last night, I've just caught up with last week's Motorsport News, and I see there is an interesting column from Howard Davies in which he mentions those vital stalwarts of motor sport, the Marshals.

Whether it proves the old adage that 'great minds think alike' or not, I don't know, but I just happen to be on the subject of Marshals (and other things) in this week's Motorsport News column (out Wednesday) although I am taking a different tack from Howard.

Now, I wouldn't like folk to go thinking that I read Howard's column and then wrote my own. In fact my own MN column was submitted before last week's MN was published. Apparently it was needed before RoS got under way. Was it coincidence, or was it great minds?

But as I said, I only mentioned marshals in  passing because what was really exercising my powers of imagination and calculation were the exorbitant costs of going rallying. In the past 30 years, rally entry fees have risen ten fold while fuel costs have 'only' quadrupled, and I wondered why this was. 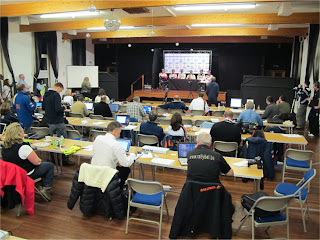 Anway, speaking of great minds, I went to the press conference in the Media Centre after the IRC RoS, not because I had to, but because I was trying to track down a set of results for the Nationals. There was a goodly turn-out of foreign journalists and TV crews, but what really grabbed my attention was Juho Hanninen's comments on the event itself.

Rally winner, Andreas Mikkelsen was equally complimentary: "I had so many good memories from last year - fast, flowing and good grip. This year, it was fast, flowing - and no grip! I had good fun in the mud and sliding around. The stages are incredible even when wet and muddy."

Later on Juho added: "I just love the Scottish landscape and the people. Everyone was so nice and helpful, marshals, officials and local people."

So despite the Scottish weather doing its best to ruin the visitors' perceptions, it didn't work. Nice one boys.
Posted by John Fife at 02:13