Argentinian roundup ... The top ten in Argentina had a different look to it at the weekend when Thierry Neuville extended his FIA World Rally Championship lead to 10 points by winning the 5th round of this year's series, the Xion Rally Argentina.
Neuville had a 48.4sec lead over Hyundai i20 team-mate Andreas Mikkelsen at the finish with Sebastien Ogier claiming third in his Citroen.

Kris Meeke lost out on a possible third place overall when the Toyota driver was given a 10 second penalty at close of play on Saturday and then punctured a tyre with 6 kms to go on the final stage: Kris commented: “The time penalty last night dropped us back to fifth, but everything was still there to fight for. The car was working really well this morning and I enjoyed it. The rhythm was good and we continued that into the Power Stage, but about six kilometres from the end, I got a warning light to say the tyre pressures were going down. I have no idea where it happened. I tried my best, and sometimes it's like this. It's a bit frustrating, because in the last three rallies we could have had a top result. I'm really enjoying driving this car, and I enjoyed today even though it didn't quite work out. I have to keep doing what I'm doing, I know it's going to come right.”

Team mate Ott Tänak also got a 10 second penalty but that only compounded his rally troubles which included a broken driveshaft on Friday and alternator problems on Saturday. And just out of interest the penalties were awarded for "taking the wrong route" following confusion around a gate on SS11.

Teemu Suninen was the best placed M-Sport driver in 7th place after Elfyn Evans crashed his Fiesta out of 6th on SS10 when it struck a roadside rock: “I’ve used these notes for quite a few years and not had a problem before," said Elfyn, "but when I arrived at the corner I felt I was carrying just a little bit too much speed. I threw it in, and we made the corner to be fair, but I couldn’t recover the oversteer. I planted the throttle but couldn’t get the car straight and we hit a fairly massive boulder that was lining the road.”

Gus Greensmith scored 2nd in WRC2 Pro (behind Pedro Heller) and 15th o/a in his Fiesta R5, but had a puncture and broken suspension to contend with.

(Thanks to Toyota Gazoo and M-Sport for the pics - Argentina anyone? ) 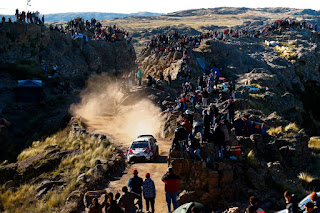 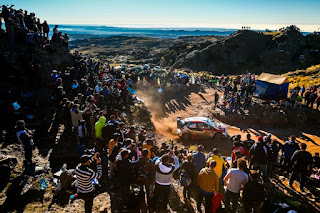 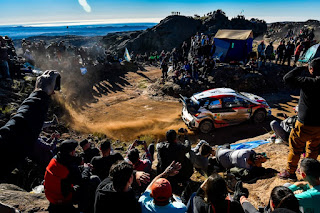 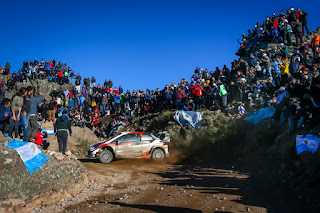 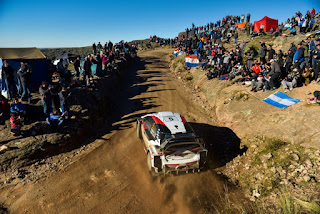 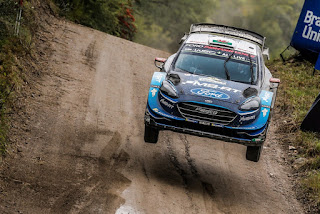 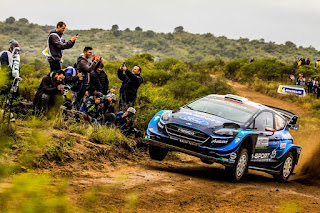 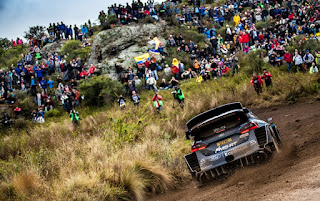 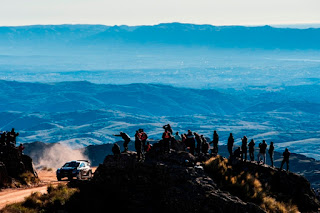 Rally - Last look at the Pirelli

I wasn't going to use these pics, but then thought, what the heck. Even without knowing the names, most of us could work out the identities of the crew, eh? Especially the co-driver description! The spiritual third Chuckle brother perhaps? 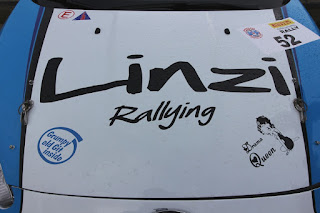 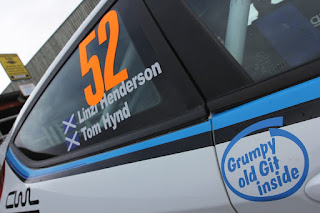 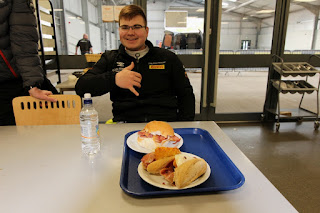 In these obsessively health and fitness conscious times, when rally drivers are regarded as athletes first and drivers second, it is encouraging to note that today's ambitious youngsters are driven to observe a healthy diet and strict fitness regime in order to be successful. One such ambitious and talented youngster was spotted practising this abstemious and rigorous lifestyle before the Pirelli Rally last Saturday. It obviously worked. He was 3rd Junior and won his class. It will also help his CV that he scored a top ten finish on a British Championship event. Gaun yersel Finlay.

Oh, and one more thing. Following comments that were made in the previous post it may be of interest that there will be Column in next Wednesday's 'Motorsport News' which contains even more thoughts and opinions. This may be of interest, or not. If it provokes discussion and debate then it will be worth it. It might also provoke some hate mail, in which case the Jimmy hat, false beard and dark glasses may well be pressed into service once again.
Posted by John Fife at 22:21 No comments: 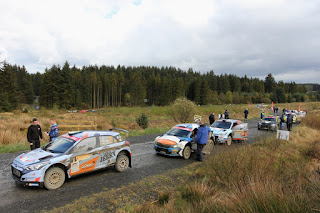 A month ago, Kielder was in a foul mood. It was cold and snowing, and it rained. Boy did it rain. It was relentless. By comparison, yesterday was quite pleasant. It was cold again, and rain showers swept regularly across  the landscape including one nasty stinging hail shower! Although we did catch a glimpse of the sun occasionally, but that was just to kid us on before it dropped more cold, wet stuff on the hardy few who had braved the elements to watch rally cars. As for the Scottish contingent contesting the Pirelli Rally there was a wee bit of good news, some not so good news, and even worse news!

Tom Cave won the International Pirelli Rally scoring his second British Championship victory on the trot. He finished 17 seconds clear of Rhys Yates with Jari Huttunen third. David Bogie and John Rowan might well have been third, but for a puncture which dropped them to 4th.

Bogie got off a to a slow start in the Fabia though: "I thought the first stage was fine," said David, "but we hit a bad bump on SS2 and the car just didn't feel right after that. The CA1Sport boys re-did the tracking at service," but he still couldn't quite match the leaders' pace. 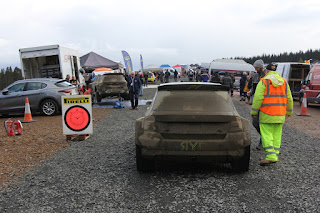 Michael Binnie did his CV a power of good with a 6th place finish, but in case you thought Claire Mole was looking decidedly unwell, it wasn't her in the co-driver's seat. As Claire had to work at the weekend, Richard Simmonds had stepped in. "The last time I sat with Michael, was a year ago at the Carlisle Stages," said Richard, "and what a big difference in pace!" They did have a problem with a rear wheel bearing in the Lancer but with not enough service time to replace it, they just had to be careful.

Alex Laffey and Stuart Loudon were well out of luck with a double puncture on the first stage in the Fiesta and no spare for SS2 and they finished outside the top ten in 11th place, but there was joy in the Retson camp. Finlay Retson and Richard Crozier finished 9th o/a and 3rd BRC Junior in their Fiesta R2T, but equally important was first place and maximum points in the M-Sport Fiesta Cup competition - the prize for which is two 30,000 Euro vouchers to be spent on the 2020 Junior World Rally Championship.

Scott and David Sloan were also out of luck when the Peugeot 208 broke a driveshaft.

As for the Historic Rally, five of our lot started - and none finished! Tom Coughtrie and Ian Fraser didn't even get to the start of the first stage when the Mitsubishi broke its rear diff and Tommy Heard and Ian McCutcheon retired the Escort not much farther on, almost within smelling distance of the pine woods. Walter Henderson and Jim Kinloch managed to start the first stage but the Escort wouldn't pull and was retired with lack of fuel pressure and then daughter Linzi Henderson with Tom Hynd retired the Fiesta at first service when the clutch failed. That left Jim Robertson and Mike Curry, and guess what, the Escort had a misfire. After a few good runs out with the car last year Jim felt it fluffing in the first stage but by the time he got to service the Escort wasn't for going any further.

Of more concern to rally fans was the fact that only 26 crews (including Land Rovers) started the International and there were 60 in the Nat B Historic event. These are indeed worrying times for forest rallying. 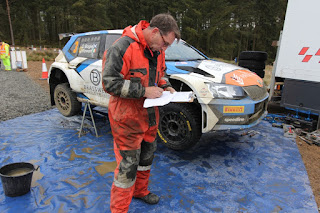 Final words from the Memorial Garden Stages Rally at RM Condor now in the on-line mag, and as you'd expect from a rally in Scotland, it wasn't all serious and sensible. For instance, one driver phoned home some for some praise and encouragement - he didn't get it, and we also witnessed the introduction of a new two-wheeled traffic hazard!