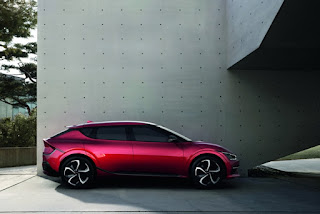 If the new Kia EV6 can live up to its advertising blurb, and there is no reason why not, then the future of motor rallying might not be quite as bleak as it looks at present. It would appear that Kia has taken a mighty step forward in electric car acceptability.

This SUV styled machine comes with a choice of options and specifications as you might expect. Of particular interest to us rally fans, is an option to specify a long range battery pack which should be good for up to 316 miles on a single charge.

Of even more interest is the fact that this new electric vehicle will also have 800V ultra-fast charging capability which means that the EV6 can go from 10 to 80 per cent battery charge in just 18 minutes. And for the performance nuts amongst us, the GT version will hit 60 mph from rest in around 3.5 seconds and will do 160 mph if the Polis aren't looking.

Admittedly the price range of these new SUVs goes from 40 grand up to 60, but what's really important here is the technology advances - improved range and awfy quick chargers. It starts to make the whole idea of 'long range' performance rally cars not so much of  a pipe dream after all.

On this basis it won't be long now before we have more compact, easily interchangeable battery packs and even faster charging. The only downsides are no whiffs of Castrol R and no blood curdling music from BDAs and V8s.

And if you think this is far fetched. Remember when Japanese cars first started to make their skinny wheeled appearance on British roads and the over-managed, strike blighted British car manufacturers laughed?

They are not laughing now - they've all gone, but Kia appears to be doing the business, and they are just the first among many. 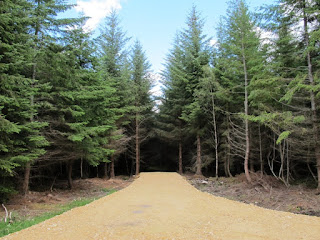 Just when you think some degree of normality can be glimpsed riding to our rescue over the horizon - the horizon moves further away!

Following last year's review, Forestry England have tossed a spanner in the works. They have advised Motorsport UK that motorsport will not be allowed to resume on their estate before 30th September 2021.

Any forest events planned before that date will therefore not get an MS UK Permit. On that basis we can expect yet more calendar changes to the various championship events.

The big problem here is that forests throughout the country have been seen a surge of visitors eager to escape the confines of lockdown and enjoy the fresh air and wide open spaces. That includes Forestry England's estate.

Apparently this situation is expected to intensify as lockdown is eased and people regain freedom to roam, with Forestry England anticipating that public demand will increase further.

This is not just because people want to get outdoors and see the sky above them - even if it is wet and grey - but also because holidays abroad are currently banned and likely to be severely restricted in the coming months. So folks can't travel abroad in search of sunshine.

Closed public road and single venue events should be unaffected although organisers will still have to apply the appropriate restrictions to those attending such events as participants, officials, and where possible spectators. So it still doesn't promise to provide an easy ride for the nation's rally fans.

So far there have been no pronouncements from Forest & Land Scotland. Wales and Northern Ireland also have their own forest management authority.

When we find out more, we'll let you know. 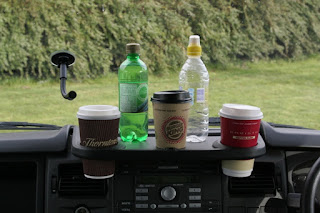 Volkswagen Commercial Vehicles recently commissioned a survey of 1,000 van drivers which suggests that the van driver's hot drink of choice these days is no longer tea!

In fact, tea is ranked third behind coffee, with Cappuccino as the top choice and Latte second. Even worse is the 'fact' that almost one in five opt for an alternative milk, such as oat, almond, soy or coconut. And when they do favour regular milk, they prefer semi-skimmed to full fat.

Methinks a Scottish survey across all makes of van drivers might reveal rather different outcomes. Transit drivers were most obviously not consulted. 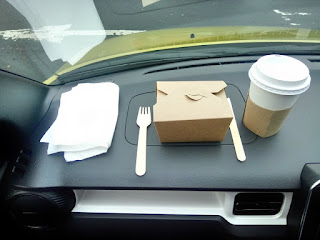 For instance, you simply can't drink coffee with a proper Scottish morning roll and square sausage with tattie scone. Nope, pure nonsense, and perhaps should be made illegal. Such proper nutrition requires tea as the appropriate accompaniment. It's the same with the full Scottish breakfast roll - sq sausage, tattie scone, bacon, black pudding and an egg. That needs serious tea to wash it down and set folk up for the day.

And another thing, where was the survey conducted? Cafe and bistro takeaways, or did they check out any of the caravans in lay-bys around the country?

We all have our favourite quick snack stop-overs. For instance, the caravan at Peggy White's corner on the old A8 at Newhouse where a double sq sausage on a roll with a cup of black tea is hard to beat. It has to be a double sausage too, because it's so succulent, savoury and meaty. Add a dash of brown sauce and it just completes the whole mouth watering, satisfying delight. Ye cannae beat it. The sausage itself is also made locally by Mallagh the Butcher's in Chapelhall - and the butcher himself lives just two doors up from  me!

In other words, heaven is three inches square, slightly crisp at the edges, with a tasty, meaty, brown sauce topped middle, wrapped up in an oven fired, golden and crispy topped mound of fluffy dough. 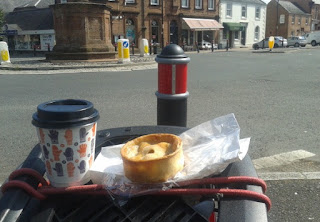 And then there is the question of Scotch mutton pies. It would be sacrilegious to drink anything other than a cup of tea with a pie or pie sandwich. It might be possible to stretch as far as a bottle of Irn Bru, but nope, tea is for pies, coffee is for croissants and other French stuff.

And the reason I mention this 'statistical survey' at all? In case you hadn't noticed, there is a general election upon us and over the next few weeks we are going to get a whole variety of folk with different political persuasions using exactly the same damn statistics to support opposing points of view. So if we can't trust a 'tea survey' what bluidy chance have we got?

This year's scheduled six round British Rally Championship is now a seven round series with the addition of the 'Neil Howard Stages in association with Graham Coffey & Co. Solicitors' on 31st May.

Apparently the British Rally Championship organisers were delighted to accept an offer to open the season at the Cheshire circuit in May, bringing an additional asphalt event to the schedule.

Regulations for this year's series are due to be released in the coming weeks.