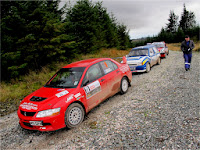 Apart from a few passing skiffs of rain, the test day at Laurieston was held in dry and cold conditions ahead of tomorrow's Armstrong Galloway Hills Rally and those who turned up had a mostly productive day, especially Caroline Carslaw. A strut top broke on the Fiesta on her first run of the day, that's the third one this year, but it could so easily have been the first stage of the rally tomorrow.

After rebuilding the Armstrong Subaru, TEG Sport had tweaked the engine and suspension a wee bit ahead of this weekend's event for Jock, hence his appearance at the test day. Barry Groundwater gave his Lancer a run to ensure that the spare diff pump is OK. He had diff pump problems on the McRae but a new one will take 2 weeks to be delivered so he had an old spare in the van and that was what he was trying out today.
And after his 'blind' test of three different makes of tyre today Mark McCulloch is faced with a difficult decision, whether to break into his piggy bank for the expensive stuff or go for second best.

Peter Stewart gave the Fiesta R2 a run out as he builds up seat time in the car. Apparently it's more difficult to drive than the ST which had more torque, so the R2 has to be revved harder and is a wee bit more temperamental. Also needing more seat time is Alan McDowall in the MkII. Remember he had the Opel Kadett for 12 years so it was more or less built around him and the Escort is still very much a stranger.

Currently he's thinking of installing a 4 spd gearbox in place of the 5 spd ZF, as this will allow him to use the engine torque more rather than continually changing gear. 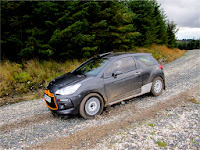 Scott Peacock blew up his 'new' engine on the McRae, so has installed his old engine in his 'new' 205 and gave it a confidence building run out today!

And James Ford appeared in his new Citroen DS3, this was the car's first run out on gravel and James seemed quite pleased with progress.
Posted by John Fife at 15:27