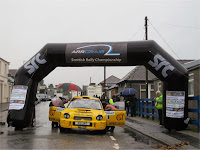 Gawd it's dreich here in Castle Douglas but most folks appreciated the extra hour of night time, especially Angus Lawrie and his crew. Remember they were at the Test Day yesterday trying out a replacement engine for the one which had destroyed itself earlier in the week. With little time to fix it they had installed a pretty well worn bog standard unit.

Well, after 2 runs yesterday a bolt broke on the cam tensioner and it wrecked the top end. Undaunted the boys set to. Using the head from the earlier 'good' engine and the block from this latest failure they assembled an engine and had it running by half past ten last night. Angus put a few miles on it before bed.

Another who appreciated the longer night was Mickey Rankin. Remember he broke the 'rotor' arm inside his Escort's Lumenition kit yesterday and his nephew managed to locate a replacement - in Banbury! Anyway, Paul Sharp (Michael's brother) jumped in his own car to drive to Manchester last night to meet a guy who was driving up from Banbury.,Six hours later he got back with the part and everybody is happy - ier (?) this morning.

And as for the Rally Start arch, the inflatable black banana, well it was taken down shortly afterwards before it went for a walk in the blustery conditions.

David Bogie leads (7m 13s) after the first stage, a wet, slittery opener to the day's 7 stage affair. He was 18 secs up on Jock Armstrong on 7m 31s, from Mike Faulkner and Chris Collie both sharing 7m 38s.

In a surprising fifth place after two years out of the driver's seat is Shaun Sinclair on 7m 47s showing he has lost none of his old flair. Just imagine what he could have done had he been match fit.

Anyway, Donnie MacDonald did 7m 54s ahead of Barry Groundwater and Andrew Gallacher both on 8m 01s ahead of Dougal Brown going well on 8m 05s with Alistair Inglis on 8m 07s and Andy Horne 8m 12s