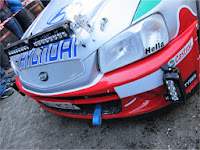 Calum Duffy was first man through the Tobermory Distillery arch this morning for Scrutineering ahead of this year's Tunnocks Mull Rally. Despite what he said last night at the Forum, he had a "few issues" this morning, as he explained: "The car was set up as it finished last year, that was the plan.  When I drove it this morning it was far too hard. We've backed it right off and it's much better."

John MacCrone's car wasn't far behind with Martin Wilkinson in attendance, so we sorted out a few anomalies. As young Peter Taylor pointed out earlier, it's not a Millington engine in the car it's a Duratec. The confusion arose because Malcolm's co-pilot last March on the car's debut was John Millington - not Roy Millington the engine builder. In fact, a Millington engine would not fit in the Fiesta S2000 shell as it's too tall and would require some modifications to the roll-cage. This is in fact a 2 litre Ford Duratec block which has been bored and sleeved to 2.4 litres. It's still very much work-in-progress so we'll see how the device goes this weekend.

Paul MacKinnon was an interested spectator, and when asked what he was up to, the twice Mull winner said: "I'm just down here perving at the cars." He's not doing the event this year because: "I've got too much work and and we're doing stuff to the house - maybe next year."

John 'Cressed Lightning' Cressey was next through the arch in the German sausage tin (MINI) fresh from 2nd place on the National B Isle of Man Rally - last May: "At my age you can get too much exercise and training, I didn't want to wear myself out or peak too early for this!"

When Andy Fenwick drove through the arch in the Hyundai Accent WRC, his lighting set-up aroused a lot of interest (see pic) as he's using a new Lazer lights set up which he sells through his 'rallylamps.com' website. "It is LED type technology, but different," said Andy, "it's no good for distance but it offers superb white spread up to 150 mtrs. A full set will cost around 1500 quid compared to a traditional six lamp set up and pod which costs around £2000."

Peter Taylor has the same set-up on his Ford Focus WRC. Like Andy he hasn't used them in anger yet but agreed that the light spread is superb although the distance is limited: "They won't suit everyone, because of the limited distance, you have to commit to the Notes much more," Well, he's young and brave isn't he.