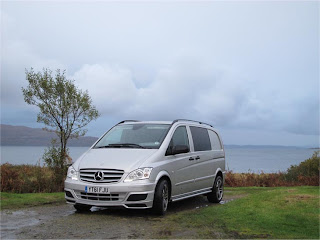 The Mercedes-Benz Vito Sport-X turned a few heads on Mull with its striking looks. Surprisingly, quite a few folk actually knew exactly what it was: “Is that the one with the bodykit and Brabus wheels?”

It was certainly striking, in more ways than one. I struck the ferry ramp at Corran with the low-slung-nose. There was little damage, but the underside of the air-dam scuffed the ferry ramp and popped a bit of plastic trim. Nothing serious, just cosmetic. But on the way home I avoided Corran and took the long way round to Fort William via Ardgour. I thought it was 20 miles or so – it was 40.

Still, that was my gain. It’s a fabulous stretch of road, even though it’s mostly single track, and the Vito is an absolute hoot to drive. Mercedes claim a 9.5 second time for the nought to sixty sprint, but that’s not the most impressive statistic, it’s the mid-range oomph that surprises other motorists. 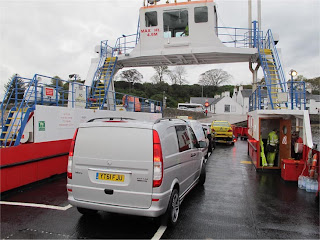 Coming back down through Glencoe and Achallader, past Tyndrum  and Crianlarich, down Glen Dochart and Glen Ogle to Callander, the Vito breezed past caravans and motorhomes, tourists and rubberneckers with an ease that belied its commercial vehicle origins.

The only drawback is that the 221 bhp, 3 litre V6 diesel is whisper quiet. Which is a pity, the distant thrum from under the bonnet has been murderously muted. A criminal strangling of audible pleasure. It’s like putting a muzzle on Barry White and then telling him to go far away and gie it laldy.

Honestly, this is a deeply sexy diesel that could sound a whole lot better if only it was allowed. This could do for diesels what the ‘Full Monty’ did for middle aged blokes.

There is another slight drawback. When playing with the manual over-ride on the 5 speed auto it has a fearful thirst.  A few times it dipped below 20 mpg, but with the sensible head on, a 36 average was perfectly achievable, and no doubt more could be extracted.

But if fuel economy is uppermost in the mind, this would not be the van of choice anyway. This a quick and comfortable cruiser in its own right, and from a personal viewpoint, preferable to an E Class Sport estate. Don’t believe me? Try it for yourself.
Posted by John Fife at 17:22