Rally - Lest we Forget 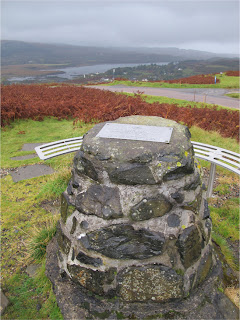 The other night Daniel Harper talked about the annual pilgrimage to Mull for the rally, and he’s right, that’s what it is. For many rally fans, it is a pilgrimage. The Mull Rally is more than a motor sporting competition, it’s an event. It’s a sociable and intoxicating, adrenalin filled celebration of the best of British motor sport.

As part of my own annual pilgrimage to Mull my first stop is always at the cairn high above Dervaig where I stop and have a chat with the late Brian Molyneux. Ever since his friends on Mull and members of 2300 Car Club erected the cairn overlooking his favourite island view following his death in 1996, this has always been my first stop on the island.

Without his efforts and determination, there would be no rally. For sure he had a lot of help from his family and the club in the early years, and especially when he tenaciously pursued national Government to pass an Act of Parliament which would sanction the first closed public road rally on the British ‘mainland’. Without his example and leadership the rally would never have got past the first Time Control, let alone allow us to celebrate the 43rd running of this unique event.

Were it not for his vision and stubborn refusal to accept ‘No’ for an answer when dealing with politicians and vested interests, the only reason we’d have to come over here is to visit Suzie Sweet’s tuck shop and get done by PC Plum for parking a pram with two wheels on the pavement.

Or maybe not. We would come for the weather anyway. After all, there’s lots of it, and we’re spoiled for variety.
Posted by John Fife at 15:19