A packed Aros Hall lay in wait for the rally stars at the pre-event Tunnock's Mull Rally Forum in Tobermory tonight.

Daniel Harper, John Cressey, Alan Gardiner, Peter Taylor and Andrew Roughhead took time out of their last minute recce schedule to entertain and delight the assembled throng ducking out of the rain for an hour.

Hosted by Lord Bunnet of the Isles, the fun commenced with a quiz with prizes being thrown from the stage at the 'lucky' winners.  The newcomers to this festival of frivolity, who had never seen such ribaldry before, quickly learned to duck if the aim was a bit off.

It was a very tough quiz, for example, one question was: "What colour is tarmac?"

Well, there had to be one, and sure enough, the answer came back: "Grey."

This prompted the obvious retort from the stage: "Aye, but what colour of grey - there's 50 Shades!" 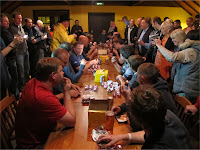 Then it was across the road to MacGochan's for the Tunnock's Teacake eating contest. The winner this year was Peppe Planeta from the Isle of Man who claims to be the team Cheerleader for the John Cope/Rob Fagg entourage. He swallowed 17 in 4 minutes and then downed a can of full-fat Irn Bru. And you know what, he's a skinny bloke.

John Fitness was second with 16, Mick Booth was third with 13 from Iain Kelly also with 13, and they had to sort it out with a tie-break. Mick ate an extra 7 in 2 minutes and Iain managed 5, egged on by over a hundred supporters and well wishers.

The winners will pick their prizes from the Tunnock's merchandise selection.