This coming Sunday, the 2012 Dunlop MSA British Touring Car Champion will be crowned at Brands Hatch. Four drivers are in with a shout – our own Gordon Shedden, plus Jason Plato, Matt Neal and Andrew Jordan.

Shedden is aiming for his first BTCC title and to become the first Scottish winner since John Cleland won the second of his two BTCC titles way back in 1995.

The factory Honda Yuasa Racing Team driver currently holds a 15 point advantage over nearest challenger Plato at the top of the table.

Shedden’s Honda team mate Neal, who won the title for a third time 12 months ago, is also in with a chance of his fourth title hoping to equal Andy Rouse’s record (1975, 1983, '84 & '85) of four title wins. Neal, bumped to third in the standings by Plato at Silverstone having led the championship for much of the season, is 31 points adrift of Shedden.

The outsider is Andrew Jordan, 61 points behind leader Shedden, but with an outside chance of becoming the youngest champion in the BTCC’s 54-year history. 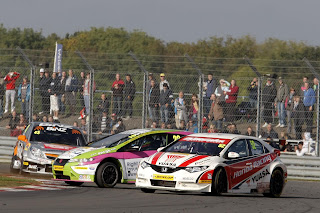 Ahead of this weekend, Gordon said: “I’m feeling relaxed and actually quietly confident. Silverstone was our car’s bogey circuit and we came out of it still ahead. I’d rather have the points in the bag any day of the week. As championship leader it means I’ll have to start the weekend (qualifying and Sunday’s first race) with maximum success ballast in my car, but the Civic’s chassis around Brands’s high-speed corners should really come into its own.”

Jason Plato added: “Fifteen points is a big ask, but I missed the title by five points on the Brands GP track three years ago having gone into the day 28 behind. Hello, Gordon …”

Matt Neal chipped in: “I’m really fired up. I’ll have less success ballast in my car and hopefully that might give me a small edge. Our chief objective is to get a Honda over the line first and Gordon should be the priority because of his stronger position.”

So here’s the plan. Get yourself three wee dollies and a packet of hat pins. Using a marker pen, write the names of Jason, Matt and Andrew on each dolly, and then come Sunday morning, start sticking the pins in them!
Posted by John Fife at 11:57