Road - Jag with a fridge 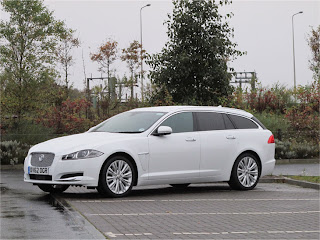 Another car launch, another exotic location - North Berwick, in the rain, the cold and the murk.

This time it was Jaguar with their new Sportbrake, more hatchback than estate car, more Whitechapel than Morse, and definitely more style than other load luggers.

It's also pretty deceiving and to call it a hatchback is to do it an injustice. The shape is an optical illusion. The roofline is actually higher than the saloon which means more headroom for the rear seat passengers. 48 mm more to be precise.

But it's not the roofline that tapers down towards the rear, it's more that the waistline rises. So although the glass area is shallower the further  back you go, it does not restrict the space in the back or the rear door aperture. 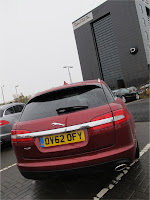 In fact tomorrow, the Jaguar hosts are taking us to a handling track and putting a Smeg fridge in the back to demonstrate not just its load capacity, but the ability of its rear air suspension to cope with heavy weight behind and above the rear axle!

Apparently the fridge weighs around 45 kgs, but its not full of porridge, bacon, eggs and Tennents.

Today the Scottish journalists, plus a contingent from Ireland, drove the 2.2 litre, 4 cylinder cars with a 200 PS diesel under the bonnet, but tomorrow, it will be the 3 litre twin turbo diesel with 275 PS - and a fridge!
Posted by John Fife at 22:36