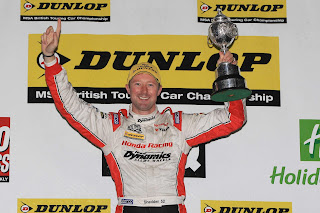 Gordon Shedden is the new British Touring Car Champion, and the first Scot since John Cleland won it in 1995 and 1989. He didn’t win any of the final three races at a rain soaked Brands Hatch at the weekend, but a fifth, second and third was enough to do the business. 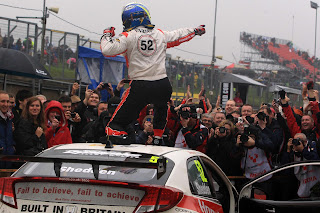 The 33 year old Shedden said afterwards: “All I ever wanted as a kid was to race touring cars – it was never about F1 – and it was John Cleland who was my hero when I used to go and catch a glimpse of the BTCC at my home track of Knockhill in Fife. I never thought I’d ever get the chance to race them, though, let alone win a race and now I’m the Champion. It is mind blowing… what a season, not just for myself but everyone at Honda. I’d also like to thank everyone who was cheering for me back home in Scotland today – including in the bar at Knockhill! I can’t wait to get home and celebrate with them.”

Shedden’s team-mate Matt Neal, who finished second in the standings, said: “Gordon has driven superbly all season, has amassed the most wins and massively deserves to be Champion. As a team we all pull together at Honda and the Civic has simply been the class of the field all year. A clean sweep of titles is the perfect result.”
Posted by John Fife at 16:16