Road - To Mull by Merc 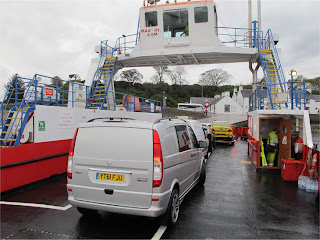 Outrageous, ridiculous, stupid, but wonderfully wicked. That’s the weapon of choice this weekend for Mull, a Mercedes-Benz Vito Sport X. It might look like a light commercial vehicle, but I suppose the chunky alloys, fat rubber shoes and body kit gives the game away. Under the bonnet it’s got a 3 litre V6 diesel pumping out 224 hp and 440 Nm of torque. 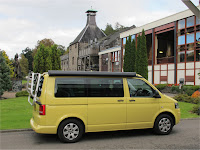 Oddly enough this van is the same price as the one I had last weekend on the McRae Rally and that was a 2 litre Bluemotion Volkswagen Beach camper van. Thirty five grand is a lot of money for a van, but with the VW at least you get two double beds inside it. However, the big difference is performance. The Bluemotion technology might be good for fuel economy, but it’s slower than the second class post.

That’s not the case with the Vito. It is smooth, quiet and quick. The Germans have really put some thought into this though, because the dashboard fuel gauge has the word ‘Diesel’ printed on it. No doubt some folk, impressed by the performance, might just pull up at the petrol pump rather than the diesel.

Fortunately they didn’t fit the 5 speed auto with a ‘Sport’ button. On the way north the van was returning 38 mpg, but when there is slow moving traffic to be tackled it drops to under 30! Even so, Merc claims it will cover the 0 to 60 sprint in under 10 seconds, but that's not the most impressive bit, it's the sheer mid-range grunt from all those 440 little torques that impresses most.

Apart from the power and the trim, Merc have gone to town on the interior to justify the price tag, full leather for the five seats and carpeted from front bulkhead to tailgate.

But having just arrived on the island, perhaps the most essential bit of kit this weekend will be the window wipers!
Posted by John Fife at 12:04