Road - Rest and Be Hopeful 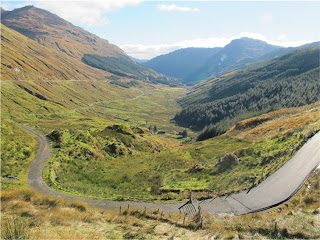 My wee story and picture on the 'Rest and be Thankful' near Arrochar the other day generated quite a bit of interest. When I passed the Argarten (lower) end of the Glen, there was a lot of road making plant and equipment still on site. The bottom end of the single track road has been re-surfaced like the top end and hairpin, but the bit in the middle is still as it was.

Apparently, Argyll and Bute Council want to re-line and re-surface the old road (the original hillclimb in effect) to create a relief road for the main A83 road which is prone to avalanches and mud-slides. According to my informant (one Mr. Pye as he likes to be called): “Assuming it's completed, traffic will run on a convoy basis for half an hour each way, so if you miss your slot you could be waiting there for an hour - an excellent opportunity to buy a meal at the burger van at the top of the hill.”

At the present time, the parts of the road owned by the Forestry Commission at the top and bottom of the hill have both been resurfaced, but the bit in the middle is owned by a classic car enthusiast who is seeking assurances that the line of the old road will be followed. This would present difficulties for road users such as 44t artics and tourist coaches who would not get around some of the corners or over the culverts so the Roads Authority would need to straighten and strengthen parts of the old road to accommodate modern traffic.

Here’s hoping a compromise can be struck whereby in exchange for allowing new alignments to be constructed the old road can be repaired and retained, and the original character maintained.
Posted by John Fife at 10:58