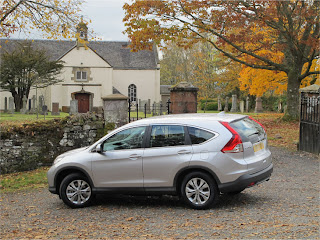 I didn’t know whether to feel insulted or flattered. I had just pulled over in front of a wee church just outside Drymen to take photos of the Honda CR-V I was driving, when I was accosted by a bloke hovering around the headstones.

“Have you got the keys?” he called out.

I looked around. No one was about so I called back, “What keys?”

“The keys for the church,” he replied,

“I haven’t a clue,” I said, as he approached – and then immediately apologised.

“I’m very sorry , I thought you were the minister!”

Not wishing to get drawn into some deep and meaningful theological discussion, I jumped back in the CR-V and sped off.

This latest 4WD soft-roader from Honda continues the theme, but has been improved all round with the latest version of the 2.2 litre i-DTEC diesel offering a sprightly 148 bhp and a healthy 350 Nm of torque and Honda had brought a number of them up to Scotland for the press launch. 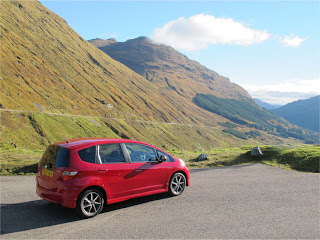 They had also brought along a nice wee Honda Jazz Si, a sportier version of the standard 98 bhp, 1400 cc motor. With its front and rear dam, alloys, sports seats and leather rimmed steering wheel it really looked quite smart and it goes better than the standard car. That’s down to the revised suspension settings, heftier anti-roll bar and re-geared electric steering.

It's not really that quick, taking over 11 seconds to hit 60 mph from rest, but it's got such a willing, revvy little motor, that it feels quite perky. The 5 spd shift is also delightfully tactile so it feels a lot quicker than the figures suggest.

Anyway, having heard that roadworks were underway up at the old Rest and Be Thankful I took a wander up to have a nosey. I was disappointed. Only the top 400 yards of the old road have been re-surfaced. The rest is still neglected, pot-holed, overgrown and falling into ruin.

However, the original hairpin has been rebuilt and widened to the extent that an artic could get round it. The nasty steep inside step on the apex is no longer there, replaced by a smooth wide sweep. Obviously something is afoot so I’ll need to find out what.

A return of the Speed Hillclimb course perhaps? I don’t think so, but who knows?
Posted by John Fife at 17:46