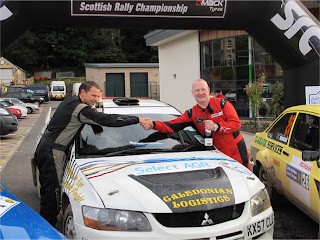 Rallying can be such a cruel sport, it can also be very intoxicating. Euan Thorburn and Mike Faulkner are only too well aware of the despair, but for Quintin Milne and Martin Forrest, the highs can be stratospheric.

Quintin scored his first ever rally victory on today's Colin McRae Forest Stages Rally and it was a rather special win, simply because of the name of the event: "To win this event with Colin's name on it means so much more," said a jubilant Quintin, "I've led a few events before now, but lost them on the last stage. I had one scare on the final stage when a brake pipe burst, again, but we just held on to the win."

John McClory too scored a career best with fourth ahead of Donnie MacDonald and Calum MacKenzie.

They were the lucky ones. Thorburn retired on the first stage when he hit a rock and punctured a wheel and damaged the suspension on the Focus. Faulkner retired after the third stage when a brake pipe burst, and although that was fixed at emergency service, when he tried to fire up the Lancer, it wouldn't start. A faulty fuel pump was the cause and that was him out. Dave Weston Jnr was leading after Errochty, but the Subaru developed a fault and Chris Collie was in the hunt for honour when the Lancer hit a stone which took out the oil pump and dumped all his oil.

Nick Elliott was the fastest of the Historic contingent in his MkII from Julian Reynolds.