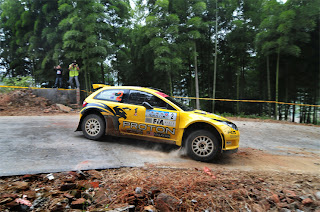 Although he won the China Rally Longyou in the Zhejiang province of China today, Alister McRae just missed out on the 2012 FIA Asia-Pacific Rally Championship title. Former Proton team-mate Chris Atkinson clinched the title for Skoda.

However, this was Alister’s second win from three rallies and his third podium from four rallies in the works Proton Satria-Neo S2000 which was running on DMACK tyres.

Alister, and his Australian Co-driver Bill Hayes, also became the first crew to complete a hat-trick of wins in Longyou.
Posted by John Fife at 21:13