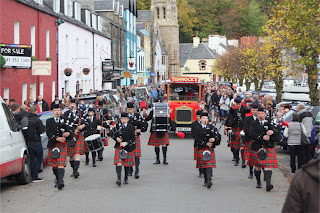 In keeping with tradition, this year's Tunnock's Mull Rally finished with a victory parade down Tobermory Main Street, before the outdoor prizegiving at the far side of the harbour.

It took an hour for the procession and the prizegiving to be concluded with a huge crowd in attendance.

There were a couple of speeches at the end, both short. Boyd Tunnock, the patron saint of St Tunnock's of Biscuitry, issued a 'threat' that if we keep buying Tunnock's Caramel Wafers, then he'll be back next year. As if the assembled throng of pie-munchers and snack snufflers needed any encouragment!

Calum Duffy also said a few words, thanking not only the organising team, but the dozens of Marshals who braved the elements in what Calum reckoned was the worst weather he had encountered on Mull rallies.

And you know what? The sun shone throughout. It was warm, dry and not a hint of the wet stuff - apart from the champagne.
Posted by John Fife at 20:26