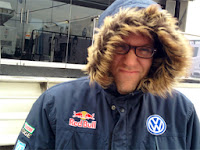 In Scandinavian countries it can be much, much colder than it currently is in Wales, but it is usually a dry cold and therefore somehow more bearable. In countries closer to the Equator it can be a lot wetter than here at home, but it is generally warmer which offers some relief, so the Welsh weather is causing problems for some of the visiting foreign based WRC teams working at Rally Wales GB. They are having to deal with a cold edge to the wind as well as insidious dampness.

However, the Volkswagen team have come to the UK well prepared, they have brought their ‘ferrets’ with them. These ‘ferrets’ have nothing to do with Compo’s little furry friends, but is the name given to their special UK-spec weatherproof jackets.

As I said yesterday when talking about ‘nightface’ as opposed to ‘lamp pods’ the Germans do have a nice sense of humour – but maybe it’s the sport of rallying that brings out the best in people.

The picture shows Andre Dietzel, one of the VW PR team, modelling a ‘ferret’ in the blustery winds.All he needs now is a nip of whisky and a spoonful of haggis and he'll be ready to face anything the Welsh weather can throw at him.
Posted by John Fife at 11:10