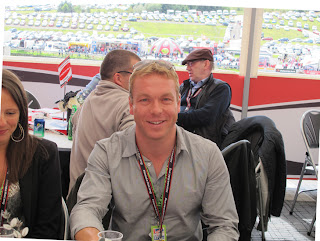 Well, there I was, sitting tucking into chicken, haggis and black pudding (courtesy of Honda) at Knockhill when a weel kent face dropped in for a bit of lunch. No sooner had the poor sod sat down then he was up on his feet again, posing for pictures with fans and signing autographs. It was non stop.

On the plus side it was good to see. The fans were genuinely pleased to see him and pleased for him. And fair play to him, he took it all in his stride with good grace, good humour and much humility.

In other words, Sir Chris Hoy is a genuinely good guy.

I didn’t realise that he was such a fan of motor racing, and the ‘promise’ has been made that he will meet up with Gordon Sheddon and the Honda Yuasa team one of these days for a BTCC test session in a Honda Civic race car.

By the time he sat down again, his chicken was stone cold, the mushroom sauce had congealed on the plate and his (wholemeal) bread roll had gone stale!

He then had the temerity to win the Honda quiz. His team won and my team, under the captaincy of one David Finlay Esq., was second, at which point I tried to lodge a protest on the basis that Sir Chris had already won enough this year. The protest was ignored.
Posted by John Fife at 19:27