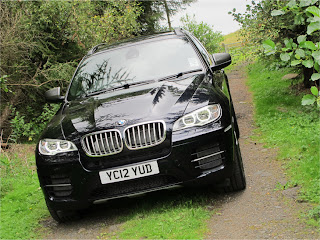 If BMW is good at engineering, comfort, speed and ride quality then they can do ugly very well too. Take the X6 for example. It’s about as appealing as an English baker’s attempt at French pastry.

The X6 will therefore not be everyone’s cup of tea, more espresso in tin mug for the discerning traveller. In other words you buy this car for what’s inside the tinware rather than outside.

And it’s the letter ‘M’ that gives the game away. This ain’t no ordinary X6, it’s the M50d and it’s more than a double espresso. This is treble espresso. For under the lumpy bonnet is a 3 litre straight six diesel, with three turbochargers. Yes that’s right, the word ‘turbocharger’ in triplicate.

This thing is not seriously quick, it’s stupidly quick. Four wheel drive, 380 bhp, an 8 speed automatic ‘box that’s made from silk knickers, and a nought to 60 time of 5 seconds. Ridiculous. 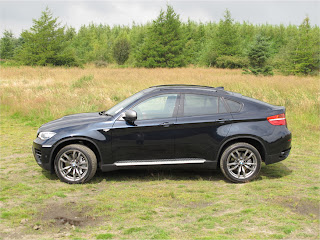 And it handles. Even sitting on 20 inch alloys clothed in Bridgestone Dueler H/Ps, the X6 floats over potholes with nary a shrug or a shimmy. It doesn’t crash out, it just soaks it all up and won’t wake the baby. Even if the suspension wasn’t up to the job, the sumptuous interior is with seats that cuddle like an amorous Fatima Whitbread.

It’s full of electronic trickery too including a Heads-Up display showing the speed on the windscreen, but it also shows the SatNav instructions, with road names, coloured junctions and a little arrow for direction of travel, but there is one problem. The car is faster than the wee arrow. I was halfway round most of the bends before it switched direction to point the way!

Honestly this thing is seductively attractive, despite its looks. On the other hand, if you’re inside driving it then you’re not outside looking at it.

BMW hasn’t worked out a price for this M-Sport monster yet but with all the extras on the press appraisal car costing upwards of ten grand, then the final price will be in the region of £60,000, and that’s just a guess.

Maybe the idea was to get us hooked on the car and then sneak up with the price when we’re resting.
Posted by John Fife at 23:06