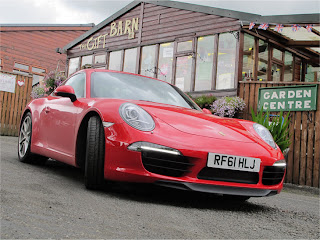 Well, there I was, doing 60 mph and accelerating hard. Just inches behind me was the deep feral growl of an angry bear. It wasn’t gaining, but I wasn’t getting away from it either. There was a reason for that, it wasn’t actually a bear, it was  3.4 litres worth of flat-six courtesy of Porsche, and it was sitting just a few inches behind my seat.

With British Touring Cars at Knockhill this weekend and the Porsche Cup race on the programme, Porsche had brought along a few of their latest cars for the Scottish motoring journalists to drive, and amongst them was the 911 Carrera with the newest version of the boxer engine, a 3.4 litre unit with 350 hp.

There are quite a lot of extra buttons on the console, but the three that interested me most were the ‘Sport’, ‘Sport Plus’ and ‘Exhaust’. The first two make it faster and ‘effin’ faster, and the third one makes it sing louder. What a combination.

The power delivery comes in huge dollops once you get the thing moving, and then there’s a seven speed gearbox to keep it on song.

And then there’s the handling. The only people who don’t like it and criticise it are those who haven’t driven a 911 or did drive one years ago, and got a fright. The latest cars are light years ahead of early models which were about as predictable as the Scottish weather.

Even so, you never forget there is a great lump of German engineering ingenuity hanging out the back. As you turn in to a corner, you just feel the weight shift at the rear. Not much, but you might just think the tread blocks on the rear tyres are giving before they bite. The front turns in beautifully, but there is just that perceptible transfer of weight at the rear which initially tends to clench the buttock muscles ever so slightly.

Once the rear settles and the big fat Pirellis dig in, this thing can be fired through a series of bends with the unerring precision of a stomach emptying session going round the U-bend and pipes the night after a bevvy session and vindaloo.

This car is intoxicating. It’s also damned close to 72 grand, but it had another 13 grandsworth of extras including the afore mentioned ‘active’ exhaust and ceramic brakes! It still didn't put me off.
Posted by John Fife at 17:57