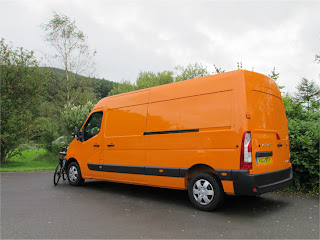 The Vauxhall Movano attracted a lot of interest at Ae Forest this mornng. Or it might just have been the fact that it was huge and bright orange that made it hard to miss.

Anyway it wasn’t the colour that really attracted the lycra lot with their funny shoes and skinned knees, it was the gearbox. This latest 2.3 litre CDTi diesel was fitted with the 6 speed Tecshift ‘box. It can either be left to get on with the job of gear-changing itself, or the driver can over-ride it by opting to select gears manually and sequentially, but it still has only two pedals. One to go and one to stop it.

This is not an automatic gearbox in the accepted sense. It has a hydraulically operated automated gearshift system which dips the clutch, changes the gear and then releases the clutch again. The big advantage over the ‘traditional’ torque converter automatic is that it is much lighter in weight and smaller in size for installation purposes. 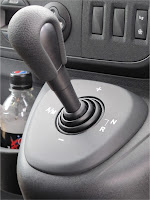 It also helps with fuel economy compared to the fully automatic ‘box although it is far too cleaver for its own good. It won’t use full revs to change up even if the driver is pressing on, however, it will hang on to the revs a bit more before changing up if the ‘kg’ button is pressed. The ‘kg’ stands for kilogrammes and therefore weight, so if the van is loaded, and the engine needs more revs to get it going and keep it on the move, then that’s what it does. It also has a ‘Winter’ button so that the vehicle will move off in second gear if roads are slippy.

See what I mean by clever? But it gets worse. Even in manual mode it won’t allow the engine to be over-revved. It won’t allow the driver to change up when he wants to. Nope it makes the decision. And it won’t downshift until it thinks it’s right to do so.

That’s fine under normal driving, but the hydraulic system is not quite as effective as the human leg and arm system for using the clutch and gearshift. That means the driver can feel every gear change as the van slows and speeds up again each time it changes gear. It’s not a lurchy gearbox by any means, but once you notice it, it can get annoying. However, each change can be anticipated and by lightly easing up on the gas it smoothes the change – but that’s not the experience you want to feel if pulling out to pass a slower vehicle!

It is a godsend in heavy traffic though, making life much easier when negotiating traffic lights and traffic jams.

And that seemed to appeal to the mountain bikers, an easier life. For deathwish nuts who like to career down greasy slopes with rocks and trees all around them, and all they have between themselves and instant brain mash is a polystyrene helmet, I thought that an odd view . But then again, after a couple of hours on a mountain bike with sweat pouring out of every orifice, blood oozing from multifarious cuts and scrapes, bruises spreading like the black death and muscles like sailors knots, then I suppose it makes the idea of an automatic for the drive home that much more appealing.

I had a good look at one of their ‘red’ trails in the forest called ‘The Shredder’ - as I stuck to my beginner’s ‘green’ trail.
Posted by John Fife at 15:12