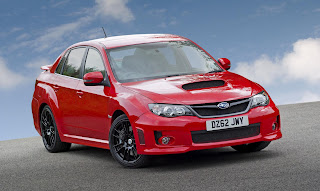 Just ahead of the September registration plate change, Subaru has come up with an offer that will be hard to resist for die-hard petrolheads. They have reduced the price of the basic Impreza WRX STI model to just £26,995. That’s a saving of some six grand over the ‘pre-sale’ price.

And if the total sum still sounds a bit rich, you can sign away your soul for under 300 quid a month.

Not content with that, Subaru UK has created a further engine upgrade for the STI. For an extra £1,599, customers can buy the 340R upgrade which oddly enough is 40 PS more than the standard 300 PS engine. Both the 340R and 320R (introduced last year) power upgrades can be applied retroactively without affecting a car’s warranty.

The 340R will accelerate from standstill to 60 mph in 4.7 seconds, an improvement of 0.5 seconds over the standard WRX STI. There is also even stronger in-gear acceleration as a result of the improved torque, up from 407 to 490 Nm.

And the clincher? There is a new exhaust system, which, according to Subaru, will enhance that unique and iconic Subaru flat four burble.