I was playing a game on the way home from Gleneagles on Saturday, which turned out to be the ‘secret’ location of the new Dacia Duster launch, but whereas other journalist colleagues were staying over, I had to drive back Saturday evening for Sunday’s rally reporting duties.

Having spent the afternoon on the Gleneagles off-road course I had a left hand drive, foreign plated Duster for the homeward journey.

I was every bit as impressed with its road manners as I was with its off road ability which prompted a new version of the ‘I-Spy’ game. Every time I spotted another SUV or compact 4x4, I calculated how many Dusters I could buy for the same money and which can go anywhere the more expensive alternative could go. 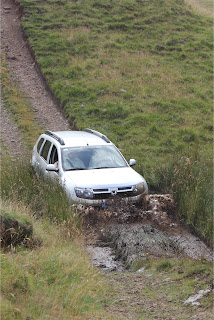 With an entry level 4WD Duster costing from £10,995 it was too easy. For instance, I could get two 4x4 Dusters for the price of one Land Rover Freelander, Volkswagen Tiguan, or even a Kia Sportage.

Too easy, so I raised the stakes. If the Duster can go anywhere a larger 4x4 can go while carrying the same number of people in commodious spaciousness, then why not do the same trick with bigger 4x4s.

OK, so it doesn’t have a Lo-ratio gearbox, Hill Descent Control or an electronic handbrake, but who needs them. The vast majority of four wheel drive vehicles in use in this country will never go further off –road than a layby. The only time we really need them is when it snows and the gritter drivers are on strike.

So for the vast majority of folk who actually need a 4x4, like farmers, foresters and folk who can’t tow a caravan into a grassy field, this will be just the bizz, without the expense.
Posted by John Fife at 11:51