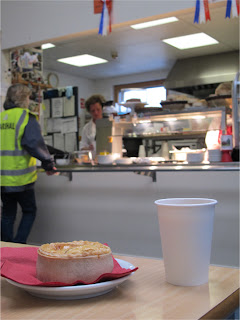 Life doesn’t get much better than this. A home-made steak pie round, and a cup of decent tea at the cafe in Huntly Auction Mart. £2.75 buys a portion of life sustaining succulence unmatched by any other gourmet food or energy drink.

But with 4 stages gone, Euan Thorburn has hit the front by six seconds from Jock Armstrong. David Bogie is third, but he was late on the road after the first two spectator specials at Cooper Park in Elgin and as he hurtled through the first forest stage at Teindland he encountered Bruce McCombie.

Bruce had gone off into a ditch and broken the input shaft on the gearbox so folks were helping him out when David arrived on the scene at speed. No problem, but it unsettled David and he finished the stage 10 seconds down on the leaders.

Barry Groundwater was really looking good through that first forest test too, but he has retired in Ben Aigan. A great pity ‘cos he could have given the usual front runners a fright today. Also looking good is Jon Burn, lacking match fitness he was slower than the front runners but his lines looked good and all the car control in the world is in there.

Graeme Schoneville smacked a gatepost in Cooper Park, but is still going and so too did Graeme Smith – it must be a Honda thing, and Alasdair S Graham was spotted parked up not far into Teindland forest.

As for yesterday’s sunshine, where has it gone? It’s gloomy and drizzly and muggy out there, but the midgies are out in force, and they’re looking for blood!