Now look closely. This is the front n/s wing of Dougal Brown’s Lancer. Last time out he crinkled it reversing out of the garage but didn’t have time to fix it before today. So how come it looks so good? The boys beat it back in to shape, nearly, then they applied a silver ‘wrap’ to the wing which matches the paint. It’s so good you can’t see the join between the wrap and the car paint on the A pillar. There’s a bit of another wing at the front underneath the wrinkled edges to give it strength, but it certainly looks better than tank tape. Most service crews nowadays can fix anything on a rally with either tank tape, plastic tie-wraps or a hammer, but applying a wrap finish to a car is no job for a service park.

Jock Armstrong appeared late in the day at the pre-event shindig in Whiteash to give the Subaru a couple of runs. The Scottish was the first time out in the car since he cowped it on the Speyside last year and he was hoping to go better than third on his return, but that was still a remarkable result behind Bogie, Thorburn and ahead of Faulkner. 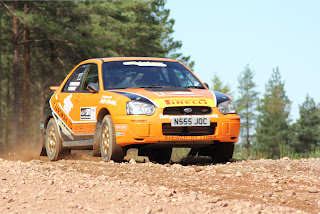 “It’s a different car,” said Jock, “it’s lighter, got more power and has a sequential gearbox, so it really is quite different to drive. Last year I was flat out everywhere and ragged with it, but you can’t do that with this set-up, you have to a pick a line into a corner then power out of it. Still, I made a change to the set-up today and no doubt I’ll make some more tomorrow.”

The reason David Bogie was sitting with Quintin Milne earlier is that Quintin has bought Bogie’s Lancer engine from last year. After his own recent engine troubles, Quintin bought this rebuilt unit from Bogie in the pursuit of reliability.

Speaking of David, and further to an earlier item about Rally Hebrides where I said he would be using Malcolm Buchanan’s MkII – he won’t. He’ll actually be driving Hamish Kinloch’s MkII. Hamish looks after Malcolm’s car, but he has built his own with a high revving 2 litre Honda engine in it, and this is what David will drive on the Isle of Lewis. If truth be told, David was testing the car at Kames yesterday!

When asked what he was going to do tomorrow, Mike Faulkner said: “Drive faster!” but behind his back Peter Foy was raiding the SRC fridge for four cans of Red Bull. Maybe that’s his secret.

Euan Thorburn reckons he’s got to the bottom of his electrical problems on the Scottish. After checks back at Buckley Towers, a faulty alternator was diagnosed and this has now been changed, so its fingers crossed for tomorrow: “We can’t let David run away with it again,” said Euan referring to David’s maximum point score when he won last year’s Scottish Championship title for the third time.