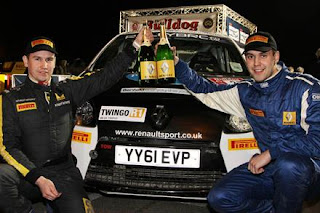 Garry Pearson and Craig Wallace had a highly productive and successful Todds Leap International Rally NI at the weekend when they clinched victory in not only the Renault Twingo R1 Championship but also the British Junior Rally Championship.

By winning the Junior title Garry is automatically selected for the Pirelli UK Star Driver scheme. The Pirelli Star Driver programme was set up in 2008 to reward aspiring rally drivers with a once in a lifetime opportunity to take part in a full British Rally Championship campaign. Pirelli has already agreed terms with Citroen Racing to run a Citroen DS3 R3 as part of next year’s highly-regarded Pirelli UK Star Driver scheme.

Based on merit, one driver is selected for the Pirelli Star Driver shootout from each of the six qualifying rallies plus the winner of the British Junior Rally Championship.

With one place yet to be decided, Garry Pearson now joins Mark Donnelly, Matthew Cathcart, Tom Cave, Jussi Kumpumaki and Osian Pryce who have all been selected so far. The final driver will be selected on Rally Yorkshire.

Garry and Craig finished 18th overall at the weekend, and were the only Twingo crew to finish while two places further back was the only other Scottish crew, the Ford Fiesta R2 of Ruary MacLeod and Paul Beaton.
Posted by John Fife at 09:40