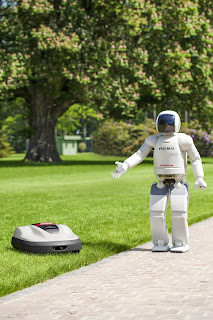 Honda, that well known builder of cars, bikes and robots, and supporter of racing, rallying and motor cycle sports, is forever tinkering with new technology. Thank goodness. And for those who hate cutting the grass at weekends, they have come up with the ultimate gadget – a robotic lawnmower.

Forget petrol powered ride-ons, or sheep to keep the grass under control, the Honda Miimo will do the job all on its own without needing fuelled or fed.

Once installed it can be left to its own devices. It cuts little and often, typically mowing just 2-3 mm of grass at a time, several times each week. Neither does it need emptying. The clippings are so small that they disperse into the lawn root system, breaking down quickly to act as a natural fertiliser.

It is contained within a boundary wire, installed under the ground or around the perimeter of the lawn. Powered by a high performance, long-life lithium-ion battery, it is self-charging and returns to its docking station when it needs to recharge.

It also features three ‘bump’ sensors, which detect a solid contact between it and any obstacle. If a bump sensor is activated, it will stop, turn and move away from the point of contact in a different direction. So if a fox jumps into your garden during the night, you won’t find jam spread on the lawn in the morning, and similarly, the weans staggering in from a late night hoolie won’t have the feet cut from under them.

To stop it being nicked, it has a built in audible alarm and cannot be used elsewhere until the owner inputs a PIN number.

Two sizes of mower will be available from early 2013, but as yet there is no price.

Or maybe this is Honda’s way of trying out the technology before they replace Gordon Shedden in the Honda Civic BTCC race car!
Posted by John Fife at 15:07