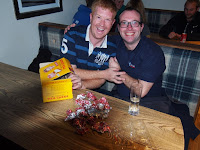 There was a messy affair in MacGochans tonight when Ron Cowan organised the annual Tunnock’s Teacake eating competition. Teams of two have to see how many Teacakes they can eat in 4 minutes.

Think that’s easy-peasy? Well it ain’t. There are two members in each team, one unwraps and hands the naked teacakes to the eater while the crowd and ‘friends’ encourages, insults and issues threats from the sidelines.

The winners this year were Richard Crozier, some-time co-driver, and first time Tunnock’s Teacake eating contestant with his Unwrapper, Neil Anderson, representing Scotland. Richard managed to scoff 17 of the rascals without even the threat of a boak! 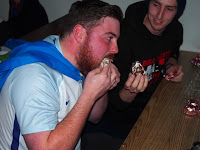 Yorkshire’s finest finished second, brothers Tom and Sam Spence demolishing 16 while another sibling team from Inverness, Rory and Callum Cruden got to number 12 before proclaiming: “Never before, and never again.”

Sons of sometime rally driver Ian Cruden, one could be forgiven for thinking that the ol' man put them up to this - as a way of getting out of buying them their dinner tonight! Old hie’lan’ habits die hard.
Posted by John Fife at 07:02