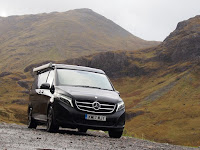 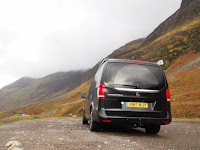 ... well the first part anyway. Tobermory has now been reached and the place is a-buzz with rally jackets and cars with stickers, although not quite the usual variety.

As ever, the trip north up the west coast of Scotland was truly spectacular. Even in the rain, the majestic splendour of Argyll and Ardnamurchan has much to offer. The mountain tops capped with cotton wool, albeit rather damp and leaking furiously, the trees burnished with a riot of browns, reds and gold, and the silver streams rushing over the rocks and waterfalls pouring off the mountainsides foaming like Fairy Liquid fountains. Magic, pure magic.

Anyway, Scrutineering is already underway and Signing-on ahead of tomorrow’s Beatson’s Building Supplies Targa Rally is due to commence shortly.

As for the trip itself aboard the Mercedes-Benz Marco Polo, it was like a magic carpet ride over Scotland’s undulations, dips and fierce bends. With no radio reception in this part of the world the choice of CDs ranged from Katherine Jones to Tina Turner and from Status Quo to the Rod Hot Chilli Pipers. Beat that for tastefully eclectic musical taste. 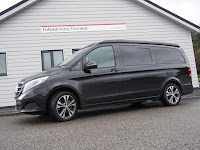 There is only one dampener on the horizon. The weather forecast. Bring wellies and brollies.
Posted by John Fife at 16:30