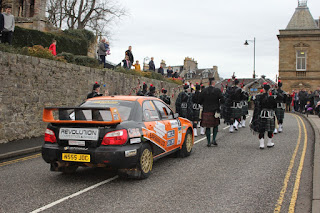 Scottish rallying without Jock Armstrong is like Irn Bru without the girders, but the double Scottish Rally Champion looks like he will be on enforced leave for a few months.

Following an incident on the Solway Coast Rally in August his actions were reported to the Motor Sports Association who referred the matter to the Motor Sports Council National Court and the case was heard yesterday following which the judgement was publicised today.

As a result Jock's licence has been suspended for 6 months and he has been fined £1000. So what transgression merited such a punishment?

Jock had volunteered to Marshal on the Solway Coast, but since he had been posted to a rather lonely spot in the MoD wilderness it can only be supposed that a certain amount of boredom crept into his duties. It wasn't as if he was marshalling a spectator area or even a junction. His task was to man a cattle grid!

Anyway, he just happened to drop his trousers and bare his buttocks to a friend who was passing by at a non competitive speed. Unfortunately, a photograph of the incident was taken in which the culprit was immediately identifiable and duly appeared on Social Media. Which begs the question, how many folk recognised him by his bum? A worrying thought indeed.

There was no malice intended, and none taken by the 'victim', but Jock paid the price yesterday. Despite the fact there were no spectators in the area (this is strictly controlled MoD property after all) and no competitors or rally officials made a complaint, the judgement was handed down.

At a time when the sport is so short of marshals, and Jock is one of very few competitors to ever volunteer to do so, this does seem a bit heavy handed.

However, it would appear that certain parties within the ongoing FAI in Edinburgh got to hear about this, hence Motor Sport Council's unease and their subsequent National Court proceedings.

I have no idea who the three National Court 'judges' are, although I understand two have racing backgrounds and the other in safety/training, but one does wonder if they have forgotten that the initial motor sporting attraction for most of us was fun and enjoyment as well as competition and participation. Things have reached  a sorry state these days, eh?

We've all done something silly, and even stupid, in the past, and this latest incident is no different, albeit caught on camera, but surely this penalty is quite excessive. By all means ban such a miscreant from marshalling - but a fine? And a competition licence suspension? If they thought that would be the end of the matter they have seriously mis-judged social media - and the Scots.

It's not clear from the Blue Book (Appendix 4) if an Appeal can be made against the National Court's decision, but if there is an acceptance of the charge in return for mitigation then perhaps that avenue is closed. It seems a pretty steep price to pay for honesty.

One thing this northern nation is good at is rebellion. When it comes to picking fights with their own shadows, let alone those in authority, the Scots are past masters. Already the beacons are being ignited across the country by those calling for an independent Scottish motor sports governing body.

So beware what you post on-line these days, it might just come back to bite you in the bum.
Posted by John Fife at 17:30